The Dark is Rising : 1 : The Seeker review 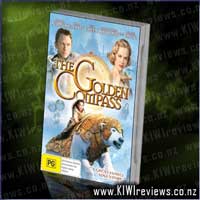 It was no ordinary life for a young girl: living among scholars in the hallowed halls of Jordan College and tearing unsupervised through Oxford's motley streets on mad quests for adventure. But Lyra's greatest adventure would begin closer to home, the day she heard hushed talk of an extraordinary particle rumoured to possess profound properties that could unite whole universes.

Catapulted into the heart of a terrible struggle, Lyra was forced to seek aid from clans, gyptians, and formidable armoured bears. As she journeys into unbelievable danger, she has not the faintest clue that she alone is destined to win, or to lose, this more-than-mortal battle...

This is the first feature film based on Philip Pullman's prize winning novel, known in New Zealand as 'The Northern Lights'.

Whenever I see this movie I always feel quite disappointed that the following two movies never eventuated. It was simply a case of bad timing and Narnia winning out.

I really did enjoy this movie. I have read the entire book series, but didn't remember enough details to be comparing the film to the book the whole time. Which is always a good thing as you should never compare a movie to its book or you will never be able to enjoy the movie.

It had a good choice of actors, and all portrayed their characters well. The scenery was stunning and the special effects were done really well.

A good family film, just a shame that it ends up feeling disjointed as they had obviously hoped to film numbers 2 and 3, but no money got put into the projects. Maybe one day they will start fresh, but who knows.

As the case with so many books turned into films, it is done so poorly. The Golden Compass is such a terrible remake of the book. Pullmans books are outstanding, i have done an English paper on them at uni - so they are right up there! The film only covers half of the first book, and the rest is not set to be made. Such a shame as its not the movie that is all that bad, its that the books are oh so fantastic!

The casting is done well. Nicole Kidman does a great job as Mrs Coutler - and its exactly how i imagined her whist reading the books. Dakota Richards also does a fantastic job as Lyra - a difficult main role! The graphics are great i loved the scenery. I was let down by the armoured bears, not sure what i was expecting but the film didnt portray them as i would of liked, the golden monkey on the other hand really is something else!!

The film has a great story line, although a lot is left unexplored. A complex 3 part book really is like taking on the lord of the rings in many aspects. I really wish it was done better - or they pursued on and made more of the first book - even all of them would of been great to see.

Really if you have the chance these are books not to be put down! Children and adults will find something in them! The movie really is nothing amazing, bar a Saturday night filler.

This was a pretty good movie, one I actually enjoyed enough to want to go out and buy the books its based on. Even though a movie can never capture the full essence of the books it is based on, the movie held itself well and apart from a few plot-hiccups I thought it did a pretty good job, even if it did have my most un-liked actress in a key role.
I totally loved the Ice Bears, they were by far the most engaging characters of this film as far as I was concerned. I especially loved how the bully bear was shown to be insecure and vain, with plenty of brawn but little brains, like most bullies. I also really enjoyed Lyra's exploration of her own inner strength and character and how she faced her fears with courage and cunning. This was a great way for me to show these concepts to my kids in a way they could understand and soak up without thinking it to be 'yet more lecturing'.
All in all a brilliant movie with a lot going for it. I cant wait to see the next one. if its even half as good as the book it will be a winner in my household.

From the beloved best-selling series of books comes "The Spiderwick Chronicles," a fantasy adventure for the child in all of us. Peculiar things start to happen the moment the Grace family (Jared, his twin brother Simon, sister Mallory and their mom) leave New York and move into the secluded old house once owned by their great, great uncle Arthur Spiderwick.

Unable to explain the strange disappearances and accidents that seem to be ... more...