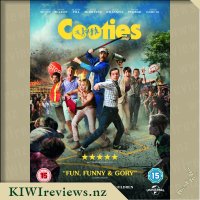 In Cooties, starring: Rainn Wilson (The Office (US)), Alison Pill (Snowpiercer, The Newsroom), Elijah Wood (The Hobbit: The Unexpected Journey), a mysterious virus hits a small Illinois town affecting only the prepubescent population, transforming them into violent, feral little monsters.

The virus centralizes in the town's elementary school and quickly the infected students have the teaching staff under siege, acting out deadly revenge fantasies with an eerie sense of childlike glee. Finally, the teachers band together, led by a hapless substitute who grew up in the town, realizing they must do the unthinkable if they hope to survive. For a comedy horror, Cooties starts off with a rather chilling introduction; a graphic demonstration of the construction of some chicken nuggets. From live chicken all the way through to being ingested by the consumer, this little documentary shows one of the way that sicknesses and diseases are spread; through poor hygiene and cleanliness, and a lack of quality checks in the food industry. Rather disturbing to watch, this is definitely a part that you would want to avoid letting any young ones watch, being far more macabre than the actual film, and actually making my stomach feel a tad queazy.

While the opening scenes give a very serious feel to the film, but be sure to take it with a grain of salt. The true genre of the film is quickly revealed, with a clear focus on the comedy rather than horror, with characters that fall in the extremes of the over the top, stereotypical "diversities"; the super quiet, philosophical guy, the quirky love interest, the over-masculine jock gym teacher, the sexual inappropriate character. The characters instantly let you know to expect more of a slapstick, in-your-face comedy. More blunt than subtle.

But this created problems for me. With such weird, exaggerated characters, they are difficult to empathise with and the presence of such well known actors such as Elijah Wood (Frodo from the Lord of the Rings trilogy, and the Hobbit), Jorge Garcia (Hugo from LOST), and Jack McBrayer (Kenneth from 30 Rock), it is difficult to separate them from their previous roles and personalities. The first 20 minutes of the film makes an attempt at character development, with a drawn out, nervous, joking style, which is generally hit and miss.

Rainn Wilson who plays Wade, is probably the most appealing character. While he was generally a bit too exaggerated, he was the only actor that sold his performance, providing a clear contrast to his other works (such as Dwight from the Office).

One of the things that appeals to me the most about Zombie/Virus films is the inevitable dwindling of the group, as the Cooties spreads and the protagonists become infected. Unfortunately, that aspect is largely missing from this film. Focusing more on internal drama within the group, the virus is placed on the backburner, and it isn't until an hour through the film (the film only runs an hour and a half) that we get to see some good proper "humans vs infected" fight scenes. Despite the audio and soundtracks, the movie lacks proper tension, using loud noises to shock the audience and giving a false sense of threat.

Of course all of this being said, the enemies are "infected" children. It is safe to safe that every adult has come across an annoying brat of a child, and well this movie provides a sneaky feeling of satisfaction once the action finally starts. Whether it's watching children getting plowed in the head from a baseball, getting electrocuted, or just a straight broomstick to the face, the guilty sense of pleasure is there.

In my honest opinion, I would have loved this film if it was a full horror; removing the comedy element, and improving the fight choreography (gaps between weapon and the struck object were just too far to be believable). The idea of zombie children of horrific, and can really instil fear in the audience, but it was underutilised in this film, placing the emphasis on the sub-par comedy, and as a consequence, the film came in below expectations.

This was alright to watch once, but being so predictable, I don't see myself watching this again.