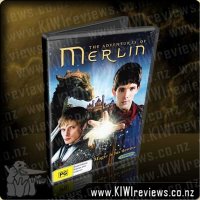 Disclosure StatementFULL DISCLOSURE: A number of units of this product have, at some time, been supplied to KIWIreviews by the company for the purposes of unbiased, independent reviews. No fee was accepted by KIWIreviews or the reviewers themselves - these are genuine, unpaid consumer reviews.
Available:
At Selected Retailers

The mythical city of Camelot, in a time before history began. A fanatical realm of legendary beasts and mysterious peoples. A dangerous world in which magic has been banned by the ruthless tyrant, Uther Pendragon. When Merlin, a young man gifted with extraordinary magical powers, arrives in the kingdom he quickly makes enemies including the heir to Uther's crown, the headstrong Prince Arthur. But guided by Uther's wise physician, Gaius, Merlin is soon using his talent not just to survive but also to unlock Camelot's mystical secrets. As he does so he discovers that his destiny and that of Arthur are inextricably linked.

Brilliant entertainment! A great combination of high fantasy and light-hearted comedy in a daring re-invention of Arthurian legend.

I found the series quickly became addictive, in spite of my first impression that it was low budget and probably going to be cheesy. The antagonism and 'almost' friendship between Arthur (Bradley James) and Merlin (Colin Morgan) has great screen chemistry and provides a natural source of comedy.

This series offers a new spin on a very old tale, with interesting results. We are introduced to Merlin as a young man arriving at Camelot, not fully understanding his gift of magic, seeking shelter and guidance from Gaius the physician (also sorcerer). We meet familiar characters in Arthurian legend, but all is not as expected. There are distinct differences that keep you guessing exactly how the story will unfoldâ¦

Will certain key events inevitably have to play out in keeping with the legend we know? How far will the scriptwriters dare to go in varying from canon? Regardless, the journey is proving to be a lot of fun so far.

Our family all thoroughly enjoyed the series.
Note: there are scenes that might be scary for younger viewers.

Before there was Amityville, there was Harrisville. "The Conjuring" tells the true story of Ed and Lorraine Warren (Patrick Wilson, Vera Farmiga), world renowned paranormal investigators, who were called to help a family terrorized by a dark presence in a secluded farmhouse. Forced to confront a powerful demonic entity, the Warrens find themselves caught in the most horrifying case of their lives