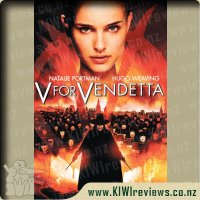 V For Vendetta is based on the graphic novel by Alan Moore and has been adapted for the big screen by The Matrix's Andy and Larry Wachowski.

Set against the futuristic landscape of a totalitarian Britain, the movie tells the story of a mild-mannered young woman named Evey (Natalie Portman) who is rescued from a life-and-death situation by a man (Hugo Weaving) known only as "V" - a striking figure in a black cloak and a high-peaked hat under which he wears a curious mask. Incomparably charismatic and ferociously skilled in the art of combat and deception, V ignites a revolution when he urges his fellow citizens to rise up against tyranny and oppression. I saw this DVD and decided that it was finally time to see it. Nearly 8 years old, I prepared myself for some very poor special effects, but I was pleasantly surprised. The use of special effects was largely minimalist, with emphasis instead being placed on the justifiably relevant plot. With the fears of terrorism spreading around the world, people seek security. But security often comes at the cost of freedom. and when large corporations become involved, who knows where the blame truly lies.

I thoroughly enjoyed this film, and despite the time that has passed since it's release, it remains relevant in today's society. In fact some of the themes of corrupt police forces, deceitful politicians, and false reporting from media are prevalent today, and there is noticeably more unrest due to it. There is a fair amount of action, and while revolution and chaos are common themes, vengeance is also present.

Natalie Portman gives a great performance, swinging from side-to-side as her character develops, until realising there is more to life than living. And while I can't help but think that it would have been much easier to track a person down, than what was shown in the film, I loved the theatrical nature of it all. The power of a lack of identity, of anonymity, is immense.

A profoundly powerful film to watch.

This was one of those movies that hubby insisted I go and see with him when it came out. I suspect it was related to the comic book background. We seem to go to all of these comic book hero kind of movies, and they are growing on me but I'm not always thrilled. This film was one of those. I was there for his sake, and not mine.

I sat back and waited for the movie to be over, expecting blood, guts and gore. Well it was not exactly gore free, but what it also had was a compelling story. Those who know me, know I'm very open minded and like to believe that everyone, no matter their differences, should be free to live as they wish. This movie visited a possible future where all the freedoms we have and some I hope we gain, are gone.

The idea that we could go so backwards whilst moving forwards, provides a backdrop that I watched with my jaw open. I loved Stephen Fry in this, his character is fleeting but so worth it for that extra zing. This film really made me think, it uplifted somewhat but felt also like a call to action. I will definitely introduce my girls to it when they are old enough.

I'm someone who has to see a trailer to get an idea about a movie, I can't go by just the DVD cover alone but my husband can. He grabbed this, with neither of us having seen a trailer for it and in this case it was actually a good thing.

In a future where being homosexual is a crime that lands you in prison (and you are never seen again) and having restricted items like bibles is also against the law one man sets to stand up against the government, aiming for the fourth of July and blow up parliament. He rescues Evey and changes her life. I really enjoyed the storyline, it was very well done, from a future we hope never happens to the characters.

The special effects are great, some awesome explosions that are well worth the watch and then there's the prison scenes. The fight scenes are full of action and V looks awesome with is long flowing cloak as he dispatches his enemies. Hugo Weaving does an amazing job as V, not once during the movie do we see his face and so no facial expressions, we are fully reliant on his expressions coming through in his voice and he does so perfectly.

This is a really good movie in every way.

Sci-fi spoof in which Tim Allen, Sigourney Weaver, Tony Shaloub and Alan Rickman star as actors from a 1970s sci-fi TV series 'Galaxy Quest', which was cancelled after four years of broadcasting.

Twenty years on, the show is repeated on television and aliens, under attack, mistake the transmissions for historical documents and beam up the aging actors in order to save the universe. But the cast have no script or director to help them.