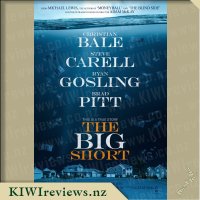 When four outsiders saw what the big banks, media and government refused to, the global collapse of the economy, they had an idea: The Big Short. Their bold investment leads them into the dark underbelly of modern banking where they must question everyone and everything. I saw a competition to win a double pass to an advanced screening to this film, but I passed on it. I then received an email specifically asking if I would like to go to the screening, but I was still hesitant. A financial film, starring an eclectic mix of male actors, it didn't catch my interest. But with free tickets available, and free time on my hands, I agreed to attend, and looking back on it, I'm glad I made that decision.

This is indeed a film based on a book about the global financial crisis of 2007-08, and it will spend time explaining to you the different aspects of it; credit default swaps, collateralized debt obligations etc. It sounds horrifically boring, but this film is well done. Directed by Adam McKay (the writer of Anchorman), his influences are ever-present in this biographical comedy drama. That's right comedy.

To make the content easier to understand, we are fed a mixture of narrators, actors breaking the fourth wall, and some eye-catching cameos from celebrities to help put difficult concepts into easy to understand terms. The fact that the film is based around someone creating something and having to convince people to help him achieve it, lends itself to a wide variety of explanations.

In all honestly, I was a little uncertain at the start of the film. When I saw some shaky cam and documentary style footage, I thought my earlier hesitance may have been on the right track, but I soon became fully engaged in the film. Each main character had his own specific style of shot, which helped to separate the storylines, and prevent confusion when switching focus between characters. But most importantly, I learned something. I left that theatre with a greater understanding of what happened to cause the global financial crisis (and it had nothing to do with any possible causes that I had originally thought may have been to blame). I came out of the theatre understanding the hate that was directed towards the bankers and banks. I came out understanding the effects that it had on the United States (New Zealand was obviously affected to a much lesser extent).

I thoroughly enjoyed this film. when it ended, I was disappointed. I wanted it to continue on, and tell me what happened next. I was left with so many unanswered questions of "what next?". The actors performed well. Steve Carell was probably the actor that closely resembled his past work. Christian Bale however showed none of his action work, instead successfully pulling off a socially awkward outsider with a visual impairment. Brad Pitt manages to provide a stellar performance in a supporting role, not stealing the limelight.

While well explained, The Big Short requires a mature mind to understand, but I greatly recommend anybody from teen age upwards to view this film. I will definitely be purchasing this when released on DVD.

Two years after he and his Autobot friends saved the Earth from the Decepticons, Sam Witwicky (Shia LaBeouf) faces a new battle: college. Meanwhile, Optimus Prime and the Autobots are working with a secret military organization and trying to make a home for themselves on Earth.

When an ancient Decepticon known as The Fallen rises up to wreak vengeance, Sam and his girlfriend, Mikaela, must figure out the history of the Transformers on Earth and find a way to defeat The Fallen once and for all.