The Mummy : Tomb of the Dragon Emperor review 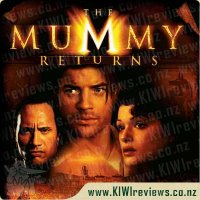 From the makers of The Mummy comes one of the biggest action adventure blockbusters of all-time with Jaw dropping special effects and non stop entertainment.

When a chain of events finds the corpse of Imhotep resurrected in the British Museum, the mummy Imhotep walks the earth once more, determined to fulfil his request for immortality. But an even more powerful force born of the darkest rituals of ancient Egypt has also been set loose in the world. When these two forces clash, the fate of the world will hang in the balance sending the O'Connells on a desperate race to save the world.

I rather enjoyed this sequel. It was very much a lot of the same from the first film, with the same characters, but it managed to add in other characters pretty successfully. Brendan Fraser and Rachel Weisz are in this film accompanied by their child, played by Freddie Boath, who unfortunately becomes unwittingly becomes a target in this film.

Imhotep, played by Arnold Vosloo, is again seeking to return to the mortal world, but his performance is overshadowed by one of the side characters, Ardeth Bay, played by Oded Fehr. His role will become clear as you watch the movie, and he is a highly moral and ethical warrior.

While the writers have done well to come up with a viable plot, they have unfortunately relied too much on computer generated images. The merging of the story lines with the 'Scorpion King' was a touch of brilliance, but visually it came out looking tacky, and fake. Despite being a member of the cast, Dwayne 'The Rock' Johnson, never appeared in the film, only his CGI counterpart did.

I will admit, some of the CGI worked great, and the battles were exciting but despite this, they struggled to make the movie 'believable', because of the scene with the 'Scorpion King'. All-in-all, it was an okay sequel. I'd certainly watch it again, but it was ultimately let down by the quality of CGI.

Rick and Evelyn are back. It's been 7 years since the events of The Mummy and they are now happily married with a young son, Alex, who has learnt well from his parents and following them around the world. When the mummified remains of Imhotep are brought to London and awakened, and Alex puts on a bracelet believed to have belonged to the Scorpion King and adventure starts that will involve the whole family.

There's some great special effects in this movie, and some very convincing creatures (that you really wouldn't want to meet in real life). Imhotep is even creepier this time around. The only character that wasn't flawless was the Scorpion King right at the end of the movie.

The characters are fantastic. You really feel for Rick and Evelyn as the have their son taken away from them and must try to follow him, hoping that he doesn't get harmed. The young boy playing Alex does a fantastic boy, alternating well between niave and scared to cocky and sure of himself.

All in all this is a great sequel to a good movie.

Thirty years ago, Clifford McBride led a voyage into deep space, but the ship and crew were never heard from again. Now his son - a fearless astronaut - must embark on a daring mission to Neptune to uncover the truth about his missing father and a mysterious power surge that threatens the stability of the universe.