« Seeking a Friend for the End of the World review 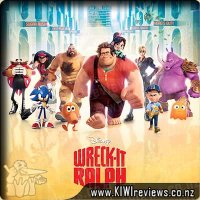 Disclosure StatementFULL DISCLOSURE: A number of units of this product have, at some time, been supplied to KIWIreviews by the company for the purposes of unbiased, independent reviews. No fee was accepted by KIWIreviews or the reviewers themselves - these are genuine, unpaid consumer reviews.
Available:
in cinemas from 27th December 2012

For 30 years, Ralph has been overshadowed by Fix-It Felix, Jr. - the good-guy star of their game who always gets to save the day. Tired of playing the role of a bad guy, Ralph takes matters into his own massive hands and sets off on a journey across the arcade through multiple generations of video games to prove he's got what it takes to be a hero.

On his quest, Ralph meets tough-as-nails Sergeant Calhoun from the first-person action game Hero's Duty, and feisty misfit Vanellope von Schweetz from the candy-coated cart-racing game Sugar Rush, who may just be his first real friend. But everything changes when a deadly enemy is unleashed, threatening the entire arcade and Vanellope herself. Ralph finally gets his chance to save the day - but can he do it in time?

After all the hype and feeling like the only one who hasn't seen the movie yet I finally got to see it tonight. Not sure what I was expecting but I really enjoyed the movie. I loved the way the characters got to travel between the games and how Ralph learnt some valuable lessons.

Tired of being the bad guy Ralph tries to show he can be a good guy and not break everything, it is good to see that he came to accept himself for who he is, warts and all. The graphics were great, you would believe you were in an arcade game (and some of the games I used to play as a kid so it was great seeing them again) and to see the world through someone else's eyes.

I would recommend this movie to anyone who has kids or anyone who wants to see a good movie.

We went to this as a last minute movie. I had managed to win a double pass, but finding time to go was hard. We finally managed to get a babysitter for my 1 year old and my 3 year old was at kindy, so it was myself, my husband and our 5 year old son who went. I had seen the trailers for this and was interested in the movie. It looked like fun, but also a bit of a take on Toy Story etc. where what you don't see is where it's all happening.

It's heartwarming story about a character who has played the bad guy for 30 years. No one likes him, he has no friends and he is getting tired of the same thing every single day. So, he goes out of his game and into another. (Can't say much more otherwise I'll give it all away)

I love the line 'when did kids video games become so violent' as uttered by Ralph, but then found that to be very ironic considering that later on one character was beating up another as a means of rescuing themselves. A movie that comments on violence in kids games, yet has it in it's own movie.....

All in all I really did enjoy this movie and will probably get it for my children for Christmas this year.

I was lucky enough to win a Wreck-It Ralph prize pack which included tickets so off we went to see it, 3 adults, a 7 year old, a 6 year old and a 3 year old. It was definitely a movie that I was considering paying to go to before getting tickets so we were very pleased to be able to spend that on taking my brother and nephew with us.

The story seemed to flow nicely and had a good mix of old and new characters, although I haven't been in an arcade for years so wouldn't be able to tell you if they were fictional or based on real games. It was amazing to see the thought that had been put in to how everything should work with the modern game characters flowing smoothly and the older ones being more rigid in their movements as they are in the games they're from. The concept that characters can move out of their game and do more than they were programmed for when there are no people around is possibly a little reminiscent of Toy Story but it certainly didn't feel like you were watching a rehash of a similar story concept, rather that it immersed you in the idea that it really could happen and we'd never know about it.

There were some excellent twists and turns in the story which were completely unexpected for the most part and definitely weren't given away in any pre-show information I'd seen. There were times that our 6 year old was scared and upset but he is quite sensitive about people getting hurt or being in danger so this wasn't completely unexpected.

This will probably be a movie that we look at purchasing when it comes out on DVD/Bluray and if to further display it's success in getting in to our childrens minds they've spent the last two weeks playing "Wreck-It Ralph" which in our family is always the sign of a good movie/programme/book!

I was very lucky to win tickets to see Wreck-it Ralph at the movies and took the opportunity to go today. I took some friends and had a wide cross section of viewers covered with our group - a baby, a 5 year old, a 14 year old, a 34 year old and someone in their 50s. Having watched the trailers for a couple of months I was amped to see it, as was my daughter. I recognised a few games from my youth in there and wanted to share that with my girl.

The story started out kind of simple and I felt like I knew exactly what to expect. But then the story grew and became so much more. Lots is hidden from the shorts which was refreshing and there's a twist or two in there too. I was a little disappointed that characters like Sonic didn't feature as much. But it was neat to see how they dealt with the setting.

I liked how they gave you all the information you needed about the world the characters live in. The game cross overs were fun and action filled. The characters were a feast for the eyes, of colours and bygone years. I loved the way they pixelated and how some of the characters moved even out of game in the way they were coded to walk or jump, etc. There's lots of comedy moments, though I found my 5 year old was clambering all over the theatre in the first 30 minutes. It wasn't until the little girl character was introduced that my daughter sat and took interest.

Afterwards, everyone agreed it was an enjoyable movie, but it took a little while to warm up. My daughter was very pleased with it, and couldn't put into words why she was so unsettled at the start. But I'm thinking the character building stuff went a bit beyond her. Still, it redeems itself and was easily an entertaining fun movie.

I was, to be honest, expecting another funny, but kinda limp, offering from the Disney/Pixar hybrid. What I was NOT expecting was to be on the verge of tears - both of emotion and laughter - and a roller-coaster ride of a story.

Sure, it had some silly moments, and a few "cring" spots in it, but it really was a stunning movie. What made it, I think, was the premise behind it - kinda like a kid's version of "Tron" in some regards, with every a real-to-me world inside every game, and instead of using networking to allow cross-machine transfer, there are cute little commuter trains running through the power lines, making the powerboard kinda like a Grand Central Station.

One of my favourite scenes had to have been the "Bad Guys Anonymous" Support Group meeting you see snippets of in the trailer above. "Zombie" was just a crack-up in the full scene, with such an attitude, I had to laugh! ANd yes, for those who weren't quite sure... the Marine Commander, Calhoun, *is* voiced by the cheerleader coach from TV Series "Glee" - just in case the stunning visual similarity wasn't hint enough.

Ralph is clever twist on the stereotypical "bad guy" genre - he's actually just a lonely guy, with a big heart, doing his job as best he can... and because his sole reason for existence is to wreck the "Niceland" building again, and again, and again... well, he's not very popular. On the 30th anniversary of the game's existence, he finds he has had enough of being the outcast and wants more out of his life. To that end, he must take the ultimate leap and risk his very existence on that one chance to get the recognition he craves.

A real heartstring-tugger and tear-jerker in places, this is a movie that is great for the youngest kids right through to adults. If I had to pick a real "Family Movie" for 2012 this would be it - if for no other reason that it is the only movie my family have been to this year where our 4 year old was happy to sit still (mostly) and watch the whole movie without wanting to get up and run around all over the cinema instead.

Overall, a medal-winner in my book!