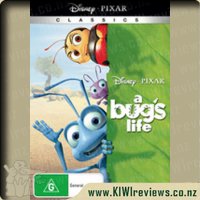 An epic of miniature proportions!

Journey inside the miniature world of bugs for larger-than-life fun and adventure under every leaf! Crawling with imaginative characters, hilarious laughs and colorful, lifelike computer animation, Disney and Pixar's A Bug's Life is terrific entertainment for all ages. On behalf of "oppressed bugs everywhere," an inventive ant named Flik hires "warrior bugs" to defend his colony from a horde of greedy grasshoppers, led by Hopper. But when Flik's cavalry turns out to be a motley group of flea circus performers, the stage is set for comic confusion...as well as unlikely heros! Featuring a star-studded voice cast, A Bug's Life presents an amazing new perspective on teamwork and determination - revealing subtle new details each time you watch it!

Disney Pixar have produced some pretty amazing family movies in recent years and a large number of our extensive DVD collection are from Disney Pixar. A Bugs life being one of those movies. This one does not quite score all tens for us, but it is still a great movie. It still gets a reasonably high school in terms of believability, but for these animated movies I base these scores, on how well the movies portrays as believable, not the probability of real life talking bugs lol

Like all Disney Pixar movies the animations are awesome. And I admit that I loved how bright and colourful the bugs were depicted in a bugs life. And I also love the messages that these movies always have. In this case the message is about teamwork and how important it is that we work together. I love that these messages are done in such a way that most of the time, kids are not even aware that the message is being conveyed.

And as is always the case with these movies there is always a main character, I'm this case Flik the ant. Theres usually the good guys and the bad guys, which when portrayed by bugs are really quite cute. In terms of attentiom span, I was more than happy to sit and watch it all, but was surprised that my kids would wonder off every now and again to do something else. But even though they did thid, they always came back to it. All in all a other great Disney Pixar film that will not dissapoint.

A Bug's Life is one of the early Disney and Pixar collaborations. A rather enjoyable film that involves an ant who loves to invent things to try make things easier, but things always go wrong, and he ends up getting into a lot of trouble.

Whilst the kiddies had a ball and laughed the entire way through, as a young adult, I began to lose interest with the back and forth that kept occurring during the middle of the film. It ended up being rather tiresome for me. The kids were easily distracted by a bug juggling, where I was waiting for the big climactic battle with the gang of grasshoppers.

But this movie wasn't made for me. This film is great for the children, and will keep them preoccupied for a long time. I would prefer it to have had more things to entertain myself so that I could truly enjoy it with them but you can't win every time.

The animation is nice and very colourful. The characters are varied and diverse, all with their own talents and quirks. I do pity whoever was tasked with animating an entire nest of ants, that would have been quite the mundane task.

Not to be confused Antz, A Bug's Life is about an ant, who while trying to be helpful makes things worse.

The one thing I really like about Pixar films is the fun that they have 'outtakes' at the end of the movie, always provides an extra laugh or two. The DVD also features "Gerry's Game" which is a delightful little Pixar short that was also shown prior to the film in theatres. The animation itself is very well done and I love the variety of characters, from the ants who follow the rules, to the bad guys, to the various circus bugs, everyone has their own quirks, despite is being about ants they aren't all the same.

The plot is fun enough, an ant who accidentally destroys their food supply runs off to try and find some warriors to save his colony from the grasshoppers. He ends up hiring a circus crew, not knowing that they are circus folk at first, but then they all team together to get rid of the grasshoppers. The ideas that they came up with were fun and this is a fun movie all around, my kids and I really enjoy watching it now and again.

This is a fun movie, well worth a watch.

Mr. Bean, sent on a mission to California to escort the world famous painting of "Whistler's Mother" to its new home in The Grierson Gallery. What the gallery owner, one of the richest men in America, and his curator Davis Langley believe, is that Mr. Bean is Dr. Bean, a renowned art expert. In fact he is just a sleepy-headed, wildly eccentric museum guard.

He's also one of the clumsiest, craziest, wackiest, wildest, most ... more...