« Sorry To Bother You review 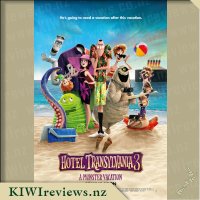 In Sony Pictures Animation's Hotel Transylvania 3: Summer Vacation, join our favorite monster family as they embark on a vacation on a luxury monster cruise ship so Drac can take a summer vacation from providing everyone else's vacation at the hotel.

It's smooth sailing for Drac's Pack as the monsters indulge in all of the shipboard fun the cruise has to offer, from monster volleyball to exotic excursions, and catching up on their moon tans. But the dream vacation turns into a nightmare when Mavis realizes Drac has fallen for the mysterious captain of the ship, Ericka, who hides a dangerous secret that could destroy all of monsterkind.

I have two young girls who have really enjoyed the Hotel Transylvania films so far, one child who thinks they're ok and myself, who enjoyed the first film but not the second one as much. This follows on shortly after the second film and just to make things different they take all the same characters and pop them on a boat... This film attempts to do two things, the first is to flip the tables on Drac and give him a new zing (aka one true love, and he thought you can only do that once) and to expand upon Drac's world by introducing an old foe. Most of the film is following along with the antics they get up to, while the dastardly plot simmers underneath all the antics and fun.

I certainly didn't enjoy this film as much as I had the first though it was about equal with the second, as in, if the kids have it on I can stand it but I'm not going to ask to watch it. The plot moved along at a decent pace but there wasn't anything to really flesh it out enough for me, the threat to the monsters lacked depth even for a cartoon and it didn't have enough substance to make me really care if the monsters would all make it out OK. And then they threw in a music battle between the main baddie and Johnathan/Drac, which was fun but kind of felt like they weren't quiet sure the best was to round up the film. Whilst I've watched the film a couple of times now, it isn't one that I really remember much more of than what was in the initial trailer. My kids are hoping for a fourth but I'd quite happily go without more of Drac and the gang.

In 1958, in the state of Virginia, the idea of interracial marriage was not only considered to be immoral to many - it was also illegal.

When Richard (Joel Edgerton) and Midred (Ruth Negga) fall in love, they are aware of the eyes staring at them and the words said behind their back. It is when they get married, however, that words and looks become actions and the two are arrested. The couple decide to take their case all the way to ... more...