« Harry Potter: 5: The Order of the Phoenix review 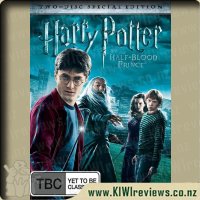 Emboldened by the return of Lord Voldemort, the Death Eaters are wreaking havoc in both the Muggle and wizarding worlds and Hogwarts is no longer the safe haven it once was. Harry suspects that new dangers may lie within the castle, but Dumbledore is more intent upon preparing him for the final battle that he knows is fast approaching. He needs Harry to help him uncover a vital key to unlocking Voldemort's defences, critical information known only to Hogwarts' former Potions Professor, Horace Slughorn. With that in mind, Dumbledore manipulates his old colleague into returning to his previous post with promises of more money, a bigger office... and the chance to teach the famous Harry Potter.

Meanwhile, the students are under attack from a very different adversary as teenage hormones rage across the ramparts. Harry's long friendship with Ginny Weasley is growing into something deeper, but standing in the way is Ginny's boyfriend, Dean Thomas, not to mention her big brother Ron. But Ron's got romantic entanglements of his own to worry about, with Lavender Brown lavishing her affections on him, leaving Hermione simmering with jealousy yet determined not to show her feelings. And then a box of love potion-laced chocolates ends up in the wrong hands and changes everything.

As romance blossoms, one student remains aloof with far more important matters on his mind. He is determined to make his mark, albeit a dark one. Love is in the air, but tragedy lies ahead and Hogwarts may never be the same again.

The Mountain Between Us
Rating: 9.8

The sixth instalment to the series brings some mystery to front and tries to answer some of the big questions but fails miserably.

I was really excited to watch The Half-Blood Prince but after seeing it I felt let down and whilst I enjoyed it it fell flat next to the others in the series. The movie seemed to put romance and comedy at the forefront when this was meant to be a much darker addition to the series. In the book we see so much more about Tom Riddle (aka Lord Voldemort) and his past but the movie left a lot out leaving me with more questions than answers. There was nothing about how Tonks and Remus got together and, well, so many key elements left out it wasn't funny.

The one thing that I really missed out on was the big battle that should have been at the end, but the movie did ok with the ending, not great, but ok. The special effects are well done, scenes throughout doing a good job at making it look real and authentic. The acting is well done throughout, though I didn't really like Slughorn (though I think that is more due to my imagined look and personality).

My least favourite of the series.

"I'm feeling a little disconnected from my real life - I mean, I don't know where my body is, or where reality is, what I've actually done or not done."

"That's a great sign - the game is a lot more fun when it starts to feel realer than than real."

Allegra Geller, the leading game designer in the world, is testing her new virtual reality game, eXistenZ with a focus group. As they begin, she is attacked by a fanatic ... more...