No Country for Old Men review

ProdID: 1807 - The Heartbreak Kid
Directed by Peter and Bobby Farrelly 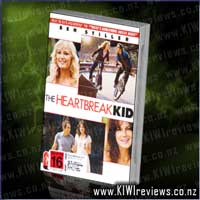 Single and indecisive, Eddie (Ben Stiller) begins dating the incredibly sexy and seemingly fabulous Lila. Upon the urging of his father and best friend, Eddie proposes to her after only a week, fearing this may be his last chance at love, marriage, and happiness.
However, while on their honeymoon in sunny Mexico, Lila reveals her true beyond-awful nature and Eddie meets Miranda, the woman he realizes to be his actual soul mate. Eddie must keep his new, increasingly horrid wife at bay as he attempts to woo the girl of his dreams.

Sitting down to this DVD, i did not know, what to expect.
Being not such a big Ben Stiller fan, I was skeptical about what i was getting myself into.
However, I was pleasantly surprised, as, being, not so much a fan of American comedy, let alone, Ben Stiller's earlier work, how much I actually laughed while watching this.
Be it from Ben Stiller's, typical, male-esque mistakes, jumping neck deep into the Ganges, without either a paddle, or a raft.

This is an amusing story, in the sense that, I have no doubt this has happened to many a newlywed. And, with Ben Stiller's "Style" growing on me, like an unsightly mole, that you don't like, but it doesn't worry you too much, because it's hidden in your armpit, and no one looks there, I actually enjoyed this movie.

Good for a laugh and I'd even recommend it to those who aren't that fond of American comedy, but like a good giggle, and have a bottle of Schnapps handy.

Overall: Not bad. Not Bad at all.

In small-town Iowa, an adopted girl discovers her talent for butter carving and finds herself pitted against an ambitious local woman in their town's annual contest.