ProdID: 3416 - Doctor Who - The Nightmare of Eden
Type of Show: Science Fiction 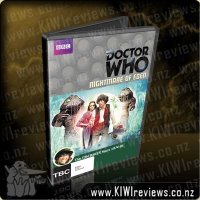 Doctor Who - The Nightmare of Eden product reviews

Two spacecraft fuse in a hyperspace collision. Fortunately the Doctor, Romana and K-9 arrive to help. But when a crewmember is found clawed by a ferocious animal, it seems there's something even more frightening stalking the corridors. The answers lie with zoologist, Professor Tryst, his CET projection machine, and a planet called Eden - the home to the ferocious Mandrels...

As I have said before I am a fan of Tom Baker as the Doctor and as usual he is wonderful in this latest release from the BBC of classic Doctor Who episodes.

On the whole the plot for this story is very well done and it's moral message about drugs and drug smuggling is just as relevant now as it was back in 1979 when this serial first aired. In fact this is one of the few Tom Baker serials that actually contain a strong moral message.

One thing I did notice in this serial was the number of turns the plot took in terms of who the guilty party was assumed/protrayed to be, in fact I think there were more twists than a Cretan maze. This did not however actually detract from the story, in fact for me it made it a game to try and guess who the guilty party actually was before the big reveal.

Another great thing about this serial is the inclusion of everyone's favourite robot companion (well only robot campanion actually) K9.

The only real let down of the entire serial was the hilariously un-frightening Mandrels, in fact as the Doctor Who Appreciation Society put it at the time - "cute rejects from The Muppet Show".

So one again a good story from TV's longest running sci-fi show, but don't expect to be scared by the monsters....