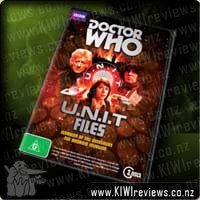 The Third Doctor faces ravenous prehistoric monsters in deserted London, while the Fourth Doctor battles robot duplicates in a strange village - but are the forces of UNIT friends or foes? Find out in these classic adventures.

THE ANDROID INVASION
Starring Tom Baker
When the TARDIS lands in the sleepy English village of Devesham, Sarah thinks the Doctor has finally got her back home. But all is not as it seems...

DVD Extras
•  Commentary
•  The Village That Came to Life - Cast, crew and local residents look back at the making of the story, in this documentary presented on location by Nicholas Briggs.
•  Life After Who - Celina Hinchcliffe takes her father Philip on a trip down memory lane to recall his distinguished career in British television and film.
•  Photo Gallery
•  Weetabix Advert - TV advert for a Doctor Who themed promotion for this breakfast cereal.
•  Easter Egg - An on-location sound recording of some of the story's scenes being performed.
•  Coming Soon Trailer
•  Radio Times Listings
•  Programme subtitles & subtitle production notes


INVASION OF THE DINOSAURS
Starring Jon Pertwee
Returning to London the Doctor and Sarah find a city almost completely devoid of life. The civilian population has been evacuated in the wake of an unimaginable event: somehow Dinosaurs have returned to terrorise the Earth.

I am a huge fan of more recent series of Doctor Who and so it was with some excitement and more than a little trepidation that I ventured back into the archives to try my first taste of Jon Pertwee and Tom Baker's Doctors.

At first, I have to admit, I could not stop laughing. Jon Pertwee's era starts out in black and white with plasticine dinosaurs terrorizing London. The dialogue and story line take their time to ramp up, and the acting is far from top notch. I can see why people used to think of Doctor Who as kind of camp. The first episode left me yearning for a complete re-watch of David Tennant's era. I persevered and things got a lot better (or perhaps I stopped being so critical and just enjoyed it for what it was). The second episode of Invasion of the Dinosaurs was in color, which helped a bit too.

By the time I got to Tom Baker's The Android Invasion, I was actually having fun. His Doctor is hilarious, with a ridiculously long scarf and a sense of complete irreverence. I enjoyed having Sarah Jane Smith to tie the two stories together. She had developed a lot as a character by the second story and was well and truly holding her own, even rescuing the Doctor at one point!

The extras are good for those who like behind the scenes type things. I definitely recommend this set to Whovians new and old alike - there is plenty to see and fun to be had in these classic old adventures and, bonus, they make you want to watch all the newer stuff again to connect all the dots.

In the all-new 21st series of the world's favourite car show, Jeremy Clarkson, Richard Hammond and James May embark on a huge road trip across Ukraine in three small cars with even smaller engines, re-live the glory days of the 1980s in three 'classic' hot hatchbacks, and have a ham-fisted crack at making a public safety film for the government.