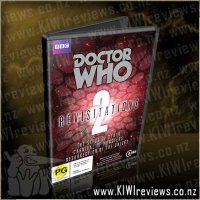 Featuring three stories, Seeds of Death, Carnival of Monsters and Resurrection of the Daleks and starring Patrick Troughton as the Second Doctor, John Pertwee as the third Doctor and Peter Davison as the fifth Doctor, Doctor Who: Revisitations 2 features newly remastered episodes, utilising advances in technology and technique, and are supported by an expanded collection of bonus features.

In the first of our stories, Seeds of Death, Deadly Ice Warriors, exploding seed pods and a lethal fungus' are among the terrors in store in this feature-length adventure.

In Carnival of Monsters, The Doctor and Jo take the TARDIS on a test flight and arrive on a cargo ship, the SS Bernice, that appears to be crossing the Indian Ocean in 1926 but is in fact trapped inside a miniscope - a banned peepshow of miniaturised life-forms - on the planet Inter Minor.

In our final tale, Resurrection of the Daleks the Doctor and his companions captured in a Time Corridor, and are forced to land on 20th Century Earth, diverted by the Doctor's oldest enemy - the Daleks.

As has become tradition, this classic Doctor Who Box Set includes a galaxy of extras including:
• Commentaries - with cast and crew.
• Behind the Scenes Documentaries - including Lords of the Red Planet, Sssowing the Ssseedsss, Episode Two - Early Edit, On Target with Ian Marter, The A-Z of Gadgets and Gizmos, Mary Celeste and many more including Come In Number Five, a retrospective of Peter Davison presented by David Tennant..
• Also includes photo galleries, PDF materials, Coming Soon Trailers, Extended and Deleted Scenes and Subtitle Production Notes.

Well here it is the next in the Doctor Who Revisitations series, and what a great collection it is.

We start the collection with a wonderful episode from the time of the second Doctor Patrick Troughton. This is one of my favourite episodes from the 2nd Doctor's era, and features the wonderful Ice Warriors. In this story the Ice Warriors have left Mars and are intent on taking over the earth. I find it rather interesting that of all the old villain's/monsters that have been brought back for the new relaunched Doctor Who that they haven't found a way to bring the Ice Warriors back, although they did make mention of them in the Doctor Who special 'Waters of Mars', but hopefully they will soon make their reappearance (Steven Moffatt are you listening??????).

The second story in the collection is a John Pertwee story. Now I had not seen this story before, but it seemed to me to be an almost prophetic episode with it's similarities to our current unfathomable interest in reality TV. Now I didn't really get into this episode as well as I have with most of the other Doctor Who DVD releases, and personally I would have liked to see another John Pertwee Doctor Who story like maybe Inferno or The Green Death.

The third story is of course a Peter Davison story, and as many of you will know by now Mr Davison is of course one of my favourite Doctors, and this story of course gets even better as it brings back everyone's favourite baddie the Daleks, but this time the Daleks are in a bad way and are getting whipped by another race called Movellans, and so the Daleks must find their old creator Davros to help save them. This story also marked the last appearance for Tegan (Janet Fielding).

There are of course the obligatory Commentaries for each story, but my favourite extra had to be the Come in Number Five special, a retrospective look at the time in the TARDIS of Peter Davison, and even better yet it was presented by one of my other favourite Doctors David Tennant

Now I just can't wait to see what they have in store for Revisitations 3.....

Don Quixote leaps to life in a riot of bright colours, music and fun in this story of the Don's final quest for adventure.

Starring Sir Jon Trimmer as The Don in his 50th year with the Royal New Zealand Ballet, Don Quixote combines a colourful cast of characters with the best of traditional classical ballet choreography and sparkling melodies from revered ballet composer Ludwig Minkus.

The story follows the confused and ... more...