Doctor Who - The Cybermen Collection review 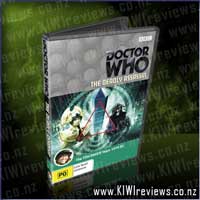 Gallifrey. Planet of the Time Lords. The Doctor has finally come home, but not by choice.

Summoned by a vision from The Matrix, he is drawn into a web of Political intrigue and assassination. Nothing is quite what it seems, and in the shadows lurks his oldest and deadliest enemy...

• Commentary by Tom Baker [The Doctor], Bernard Horsfall [Goth] and Philip Hinchcliffe [Producer].
• The Matrix Revisited Cast, crew and critics look back at the making of this story, featuring director David Maloney, designer Roger Murray-Leach and the founder of the National Viewers and Listeners Association, Mary Whitehouse.
• The Gallifreyan Candidate A look at RIchard Condon's novel The Manchurian Candidate, a major influence on the plot of The Deadly Assassin.
• The Frighten Factor What exactly is Doctor Who's 'Frighten Factor'? A diverse panel of experts try to answer the question.
• Radio Times Billings Listings for this story presented in a PDF file [DVD-ROM - PC/Mac].
• Photo Gallery.
• Production Information Subtitles.
• Easter Egg.
• Digitally remastered picture and sound quality.

This story is purely and simply Tom Baker at his finest. This is one of the few stories where the Doctor has no companions and so must work to unravel the answer to the mystery that the Doctor finds himself inexplicably involved in.

In addition to an extremely good story the added features on this DVD are as always a great bonus to have. From the The Matrix Revisited feature to the Frighten Factor to the Commentary these are great extras and only just add to the value of this DVD set.

This show relives the Face to Face world tour that Elton & Billy did in 1999.

Featuring Kim Hoffmann as Sir Elton John and Deryn Trainer as Billy Joel, this great show creates a sensational tribute to the greatest Rock/Pop artists the world has ever seen.