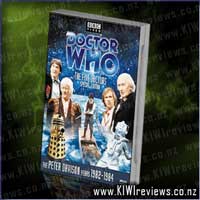 Disclosure StatementFULL DISCLOSURE: A number of units of this product have, at some time, been supplied to KIWIreviews by the company for the purposes of unbiased, independent reviews. No fee was accepted by KIWIreviews or the reviewers themselves - these are genuine, unpaid consumer reviews.
Available:
June 2008

Featuring the first five incarnations of the famed Time Lord.

This double-disc extravaganza is packed with extras, including a very special hidden feature, along with The Five Doctors episode that was originally broadcast to celebrate the Twentieth Anniversary of Doctor Who, plus the Special Edition with extended scenes, new visual effects and a stereo soundtrack. This story is unique as it reunites all of the first five Doctors, friends and foes.

Someone is taking the Doctor's past selves out of time and space, placing them in a vast wilderness - a battle arena with a sinister tower at its centre. As the various incarnations of the Doctor join forces, they learn they are in the Death Zone on their home world of Gallifrey, fighting an array of enemies including the Cybermen and a Dalek! But does the Dark Tower in Gallifrey hold one final deadly secret?

Special features include:
•  Commentary on TV version by cast and crew
•  Celebration: A look back at Doctor Who's 20th anniversary celebrations in 1983
•  The Ties That Bind Us: A documentary examining the links to the show's past and future
•  One Studio: A studio recording of the only occasion when all of the Doctors were together on set
•  Out-takes, Bloopers and gaffes from the making of the story
•  (Not So) Special Effects: A look at a typical day's work for the visual FX crew
•  Publicity Clips: The actors publicise The Five Doctors
•  Trails and Continuities: BBC1 trailers and continuity announcements from the story's original transmission
•  Isolated Music: The score for both versions is available on a separate music track
•  Easter Egg: A special hidden feature on Disc 1

I have been a fan of The Doctor and his antics for my whole life... and I have to say that this special 25th Anniversary story, even though it is now closer to the 45th Anniversary, still hold much magic.

Filmed during The Doc's 5th incarnation, played by Peter Davison, this 2-disc special brings you not only the televised release of the "The Five Doctors", but also the Special Edition, with a lot more tucked into it for the devoted Docophiles out there.

Personally, I found the televised version to be in the truest style of the era, with rough cuts between scenes, strange events popping up all over the place, plots that slowly describe themselves as the story progresses, and characters that interact in a realistic manner, as though the scripts are merely guidelines. The only drawback for me was the appearances of Tom Baker... he was hardly there! And when he was, he wasn't really a part of the plot, but more of a cut'n'pasted-in part-player. A total shame really, as he was one of my favourite incarnations of The Doctor.

Overall, this is classic Doc Who stuff, fit for any devotee... with unexpected allies and villains everywhere, near-miss escapes and the odd cameo by a badguy from past episodes. As one of the series writers put it... "There's something from the past in every episode." If you enjoyed the classic episodes, you'll certainly want this!

This highly collectable specially packaged 6-disc box set features all 13 episodes from series three, the 2006 Christmas special plus a galaxy of extras including commentaries, out-takes and deleted scenes.

Well regarded by fans as possibly the best series yet, the Doctor faces deadly foes including the Daleks and his arch-nemesis the ... more...