Family Guy - It's a Trap review 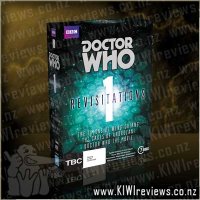 Featuring fan favourite Tom Baker as the fourth Doctor, Peter Davidson as the fifth Doctor and Paul McGann as the eighth Doctor, this brand new collection contains three classic adventures, The Talons of Weng-Chiang, The Caves of Andozani and Doctor Who: The Movie as well as specially commissioned content over a whopping 7 discs.

In the first of our adventures, The Talons of Weng-Chiang, our inimitable Doctor Who and his assistant Leela are confronted by sinister and seemingly inexplicable occurrences in this gripping thriller set in the shadowy depths of nineteenth century London. With the help of Professor Litefoot, the Doctor investigates the gruesome murder of a cabbie and the mysterious disappearances of young girls. Whilst being chased by giant rats and forced to pit his wits against an evil doll and a merciless illusionist, he comes face-to-face with his most deadly enemy to date: Magnus Greel - a fifty-first century war criminal posing as Weng Chiang, an ancient Chinese god.

The Caves of Andozani takes place on the barren world of Androzani, where the Doctor and Peri find themselves embroiled in a long running underground war. Military troops mount an armed blockade whilst gunrunners bring in weapons for the sinister, masked renegade, Sharaz Jek. Meanwhile, lethal androids guard the caves, where a deadly creature lurks in the shadows, killing all in its path. At the heart of the conflict is a substance called Spectrox - the most valuable item in the universe...and the deadliest! Will the Doctor make the ultimate sacrifice to save his young friends life?

In our final story, Paul McGann stars in his only outing as the eighth Doctor in, Doctor Who: The Movie. Returning home to Gallifrey with the remains of his arch enemy, the Master, the TARDIS is forced off course, landing the Doctor into the middle of a street gang's gun battle in downtown San Franciso. Critically wounded in the shoot out, the Doctor has to regenerate to save his own life. And he's not the only one - the Master too has a new body with which to wreak havoc. As the clock counts down to the start of a new millennium, the Doctor has to stop the Master destroying all life on Earth. But at what cost...?

A fantastic collector's item, each story has been remastered with 3 extra discs of special features. Equating to a staggering 300 minutes of brand new content, Doctor Who: Revisitation Boxset is a must have for fans of our intrepid time traveller.

Special features include behind the scenes, making ofs, documentaries, commentaries from main cast and much more.

I couldn't wait to get my hands on this DVD set as it contains two of my 3 favourite actors to ever portray 'The Doctor', they are Tom Baker and Peter Davidson.

The first story sees the Doctor and his companion Leela in 19th century London, up against a futuristic war criminal. What I really liked about this story was it's set atmosphere, it has mostly been shot as a dark set, so much use is made of the shadows and the darkness. This story whilst being a great tale was unfortunately let down a wee bit by some of it's visual effects, particularly that of the giant rat, unfortunately I have seen some stuffed animals that were scarier than that. Now I know that Doctor Who was never known for it's super high quality visual effects, but in this instant it's gone just a bit too far down the quality tree.

The second story is in fact the last story from the 5th Doctor and marks the start of the 6th Doctor (Colin Baker). This story is all about politics, mining and bats. Now any one of these in a Doctor Who story doesn't bode well for the Doctor, so having all three is just downright mean

. Peter Davidson has said that this is his favourite story out of all the ones he did and I have to agree with him, and it also seemed to be a very fitting way to say goodbye to the 5th Doctor and hello to the 6th.

The last story in this set is actually the much lauded Doctor Who movie that was intended to relaunch the Doctor Who franchise in America. Now whilst it was a ratings hit in the UK it unfortunately failed in the US and so any plans for a series to continue on after it were abandoned. I have spoke to some people who don't really like this movie, but myself personally I think it was a great attempt to give the franchise a reboot, but for whatever reason it didn't work. Paul McGann does an admirable role of playing the 8th incarnation of the Doctor, and Eric Roberts I think is superb as a newly reborn 'Master'. Unlike all the other Doctor Who stories that were set on earth, this one was located in San Francisco rather than the UK.

Also included in this set is an extra 300 minutes (that's 5 hours) worth of documentaries, commentaries and behind the scenes footage, that alone to me is worth the price of the set.

Fairy Dancing.
When Harmony and Rhapsody discover tiny ballet slippers, they remember childhood days of fairy ballet, and decide to spend the whole day dancing with their friends. From jazz to tap, tango to rock 'n roll, bootskooting to ballet, the fairies discover so many different kinds of ... more...