« The Art of District 9 review 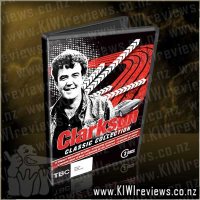 Featuring six classic Clarkson Specials from 1996 - 2002, this collection is an absolute automotive feast.

See Clarkson unleashed as he is sent on a mission to find the best and worst cars ever made, puts some of the most outrageously fast cars ever built through their paces, takes driving lessons to new and uncharted heights, and puts Japanese silicone wizardry to the test against European style.

Unleashed On Cars (1996): When Jeremy sets out to find the best and worst cars ever made the results are startling. This DVD includes some of the most spectacular car adverts of all time and Jeremy has his first ever on-camera crash.
Apocalypse Clarkson (1997): A supercharged blend of havoc and horsepower, Jeremy is madder than ever as he searches for the best handling car in the world.
Outrageous Clarkson (1998): Jeremy assembles the entire membership of the 200mph 'Hypercar' club and puts the 9 most outrageously fast cars ever built through their paces.
Head To Head (1999): Jeremy pits top super tech cars against each other to determine which is the fastest a Porsche, Yamaha R1, The BMW M5 or the Jaguar XJR.
At Full Throttle (2000): Jeremy gets up close and personal with a range of customised cars and even surprises himself with the discovery that with the help of a socket set it is in fact possible to make the best cars even better.
No Limits (2002): Driving lessons are taken to new and unchartered heights as Jeremy shares some tricks including how to stay in control when you're going sideways with smoke pouring off the tyres.

I absolutely love Jeremy Clarkson in the re-imagined Top Gear and so I couldn't wait to see him in some of his independent programs that he did outside of Top Gear.

One of the very first things that struck me in watching the first of these programs was how youthful he looked back in '96. I mean I know it's only been 14 years, but he certainly seems to have aged to me.

Another thing I noticed was his style, you could just see some of the 'Classic' Clarkson humour starting to come through in the first two shows, and as we progress through the other four shows that humour becomes far more obvious.

If you are a car buff, a petrol head, or just like fast cars then this DVD boxset is for you. Whilst he does look at some of the more conventional cars most of what he looks at are the kinds of cars that we can only dream of driving much less owning. These cars range from the standard sports cars of the Porsche 911, the Lamborghini Countach and the BMW M5 to the likes of the Bugatti EB110 the forerunner to the worlds fastest supercar the Bugatti Veyron.

One thing that became apparent to me whilst watching these DVD's was that you could easily see where the ideas for the new Top Gear came from. Another thing that was interesting so see was to compare his opinion to some cars back then and to see what he thinks of them now through watching Top Gear (which re-started up in the same year as the last of these specials).

Having happily added this DVD set to the rest of the Top Gear DVDs on my shelf, i'm now off to see what I can find in the way of Richard Hammond's motoring DVDs

Big Train was the eagerly awaited follow-up to Father Ted from writers Graham Linehan and Arthur Matthews, and is a sketch show in the tradition of Monty Python.

Big Train steams out of the comedy tunnel as realism meets utter stupidity in a cavalcade of daft sketches performed by high-quality actors in a series of stunning costumes and vast sets reminiscent of the worst excesses of DW ... more...