« Superhuman - The Awesome Power Within review 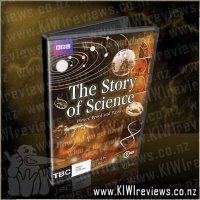 The Story of Science product reviews

The astronomer who lost his nose in a duel but helped create a new vision of the Cosmos. The alchemist who tried to make gold from human urine, setting us on the course to modern chemistry. The Irish doctor who found a recipe for hot chocolate but helped to explain the diversity of the natural world.

We've been told often enough that the story of science is peppered with eccentric characters and eureka moments like these but there is another side to the story of science that is far less often considered - the connections between great historical events, technological developments and brilliant minds that have shaped the evolution of the world's scientific understanding.

In a landmark six-part series, Michael Mosley (Blood and Guts) takes us on an informative and ambitious journey that explores how the evolution of scientific understanding is intimately interwoven with that of society's historical path.

For three thousand years, humanity has pursued the great questions. What's out there? What is the world made of? How did we get here? Can we have unlimited power? What is the secret of life? Who are we? But it is the epic story of how we've answered these questions that makes up the story of science.

An insightful series packed full of surprising facts and unexpected connections, this is the ultimate story of how history shaped science, and science made history.

This DVD also includes the BBC4 factual series: The Cell.

For those of us whose brains are wired to find science to be utterly fascinating, this series will be pure candy. Presented in a stunningly captivating style, the series takes us right back to the beginnings of science - alchemy, astrology, astronomy, pure maths, geometry - and shows how each layer of knowledge not only laid foundations for the ones to come, but in many cases inspired the creative leaps that brought about the next revolution.

Some of the key figures paid dearly for their beliefs - the most extreme example being Galileo - who was vilified and persecuted for his rigorous studies and eventually forced by the Roman Catholic Church - upon pain of death - to publicly recant his assertions despite overwhelming evidence supporting them. A fictional account of this period - that still manages to contain much evidential truth - is reviewed here.

I found the series to be well presented, pitched in a way that not only imparted a lot of knowledge, but managed to keep it at a level accessible to anyone with a high-school-level science background. This, I think, was a master stroke, in that it ensures the basic concepts are retained intact without too much dilution and metaphor, but also that it will appeal to an audience that has significant interest.

Overall, I think this series is a great success - educational, entertaining and enthralling - but also hold great benefit for those who home-school their children. Regardless of your beliefs, science is a fact of our daily lives... and discounting the dispute over the origins of the world around us, the laws of nature are immutable... this is the story of how we began to grow up and learn them for ourselves - this is not about hum,an beliefs, it's about human discoveries.

Patrol Boat sailors say their job is the best in the Navy. A small boat and its crew facing real dangers - not just war games.

There are plenty of examples of those dangers in the 4th explosive series of Sea Patrol. The crew of the HMAS Hammersley is back on duty cruising Australia's tropical north from the Great Barrier Reef and through the waters of the Torres Strait. With 24 sailors from every walk of life, of every age and ... more...