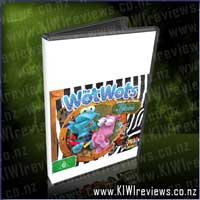 The WotWots are two fluffy alien adventurers who have landed in a local zoo and want to learn all they can about the animals who live there.

They discover all kinds of things in these eight adventures. They find out that some animals are good at hiding and that not all creatures have spots like them. They even discover that some creatures don't have soft fur at all - they have prickly spikes instead!

This is one of the many WotWots DVDs we have as my 3 year old loves the Wotties and often asks to watch them especially when he is tired or not feeling his best. I like any DVD or toys that are educational and the WotWots delivers as well as fun and opportunities for the kids to copy and laugh.

The kids learn about the animals in a way that is fun, they enjoy guessing what the animal is and then spend ages mooing like a cow or walking like a giraffe or pretending to be a monkey and they are willing to watch the DVD over and over again so that is always a bonus.

The animation is really well done, I'm not a fan of the speech or lack thereof but the kids don't seem to have a problem. The kids also like drawing and often scribble and then make me guess what they were trying to draw so the kids are learning so much more than I could teach them.

Highly recommended for anyone with kids

The WotWots are a huge hit with my two (nearly three) year old. She is crazy about animals and she loves the guessing games Spotty and Dotty Wot play with the narrator. There are shots of part of an animal or a sound and we guess what it was. She also loved the drawings of composite animal. She will often shout at the TV "No, that's not right."

As a parent I like the fun way the children are taught about animals. This DVD helped educate them about camouflage and other ways animals can protect themselves. The one thing I don't like about the WotWots, but my daughter thinks is cute, is the way they speak. They have a very limited vocabulary which the narrator translates for us. It reminds me a bit of the Telly Tubbies and their baby speak. It certainly doesn't encourage our young children to speak properly.

The writer Martin Bayton was already well known for writing and illustrating children's books so when the WotWots came out I had to see it. I wasn't disappointed. This is a great New Zealand production. and it is great to see so much footage from Auckland Zoo.

My daughter absolutely loved the WotWots as a 3 and a half year old. Back before we got Sky installed, she would watch it daily on Kidzone. She still catches it on Kidzone even now.

So what did she like about it? The WotWots are into the same things she is. Learning things about animals - check! Art and drawing - check! Being silly and have fun - check! I also love that the show is made in New Zealand. The animals are familiar, being filmed in a local zoo.

It doesn't have high action singing and dancing. But it has a lot of learning opportunities, where you can start a conversation about the animal, and take the learning further if you want to. I would recommend it for older toddlers/pre-schoolers. It would also make a good "before nap/sleep" show, as it isn't high action like some of the other shows.

This is a cute, but rather subdued children's program, especially when you think of the more lively shows aimed for similar ages like Hi 5, The Wiggles, Dora the Explorer, etc. While it still does educate pre-schoolers in some ways, with covering animal noises, their names, patterns etc, The WotWots is not really one for keeping an active toddler/pre-schooler enthralled. My 15 month old son hung about for less than 5 minutes before he was off playing with his toys in another room. Give him a show with more music and more action, then he'll hang around longer.
Despite this, I will admit the animation side of things is rather well done, and I dare say the soft toy versions will sell pretty well, as Spotty Wot and his sister Dotty Wot make for a cute cuddly-looking pair, with their pastel colours and fluffy-tipped antenas. Spotty Wot was definitely the more artistic one of the pair, although he only ever seemed to draw himsel or his sister with minor changes that related to the animal that was the main focus of that particular episode... it would have been nice to see him draw the actual animals themselves occasionally maybe. Dotty Wot seemed more interested in the actual educational side of things, as she's the one to normally go hunting to find the name of the creature they've heard/seen part of... and try to copy the sound of the animal's name.
The episodes were kept nice and short, which is definitely a plus for a toddler's usually limited attention span, and the information is passed along to viewers in a very child-friendly manner. I just found it somewhat lacking in "oomph" that keeps even a little one entertained.

A plethora of compelling storylines play out to their inevitable, often bloody conclusions in Season 5 of HBO's blockbuster, Emmy award winning drama series.

In the wake of the numerous shocking deaths of Season 4, the season opens with a power vacuum that the various players all across Westeros and Essos scramble to fill. At Castle Black, Jon Snow must balance the demands of the Night's Watch with those of the newly arrived ... more...