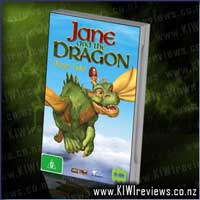 Together they star in a series of fun adventures set in medieval times. While Jane is studying to be a knight, she also has to look after clumsy Dragon and stick up for him when things go wrong. It's a tough job, but Jane is a good friend and always knows the right thing to do.

Jane and the Dragon
Rating: 8.5

Jane's friendship with Dragon grows stronger in these episodes, and her friends all start to realise that even though he can be an annoying bumbling fool who tends to make a lot of extra work for them (that tail of his is FOREVER knocking things over and breaking them!!), Dragon has a heart too, that can just as easily be hurt like theirs, along with learning that having a dragon around can make a lot of jobs a heck of a lot easier!! In Shall We Dance, Jane finds that even though standing up for herself and what she believes in can cause problems with some, true friends will stick by her no matter what, and there's usually a way around things that keeps most, if not everybody, happy. The Offer teaches the importance of telling the truth, because when your friends believe your lies, you might not like the way things turn out. Dragon Rules shows that friends of all shapes and sizes can work together as a team, no matter what their differences. And finally, All Fools' Day again shows the joy of working together with friends, and the fun that can be had with harmless pranks.
This is definitely a series I can watch happily over and over again, many times, before I actually got tired of it- with or without my son, and I found these episodes just as enjoyable as the first disc. So if the weather's miserable, and you've got kids (10 years and under would probably enjoy it more than the older ones), then curl up with them on the couch and settle in for an afternoon of cute animation and stories full of good morals.

Set in 1975 during the final days of the American occupation of Saigon, Miss Saigon is an epic love story about the relationship between an American GI and a young Vietnamese woman.

Kim is working in a sleazy Saigon night club owned by a notorious wheeler-dealer known as 'The Engineer'. John, an American GI, buys his friend Chris the services of Kim for the night. That night will change their lives forever.