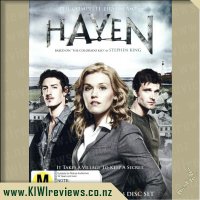 She has no past. She has no family. She was raised in an orphanage. So, she lives for what she does best: be an FBI agent. Thatâ ™s why Audrey Parker is sent to a distant Maine village called Haven, to investigate the crime of a prison fugitive. What she does not know, is that her past is connected to that village, that old threats from the past are coming back, and she is going to be a central piece on everyoneâ ™s li­feâ¦or death.

Season One of Haven came out a few years ago and I managed to watch one episode at the time, enjoyed it but didn't manage to get back to the tv at the right time to continue watching it and forgot about it. Well it has begun airing on The Zone, with a boxset weekend for season one and I figured that was the perfect oppertunity to finally watch it. Audrey ends up taking a case in Haven, no memory of herself and an orphan, she is drawn in when she discovers a photo of a woman who looks just like her, so begins the mystery of her past and the mysteries within Haven itself.

The big protagonist of the show are 'The Troubles' though we never actually get to meet them, just the afflicted, so this is a good mystery show that I want to keep watching just so I can find out who or what they are. Each little episode can easily stand alone but if you want the bigger picture then watch from episode one, gives you the fuller picture. The actors in this do a good job, there are a couple which could have been better, but as an overall cast, this is well done, those who are shady are shady and those who are complex are complex etc.

I've finally finished watching the first season and have enjoyed it (my husband gave up after 3 episodes) enough so that I am going to be watching season two (luckily I recorded that too) because I really want to see how much more Audrey figures out about herself.

We have 16 pool tables, and an official Korean Billiards table.