« The Story of Science review

Dog Did It review 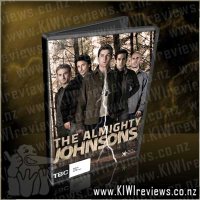 The Almighty Johnsons is a comedy-drama series about four brothers who just happen to be descended from Norse Gods. Each of the Johnson boys has his own godlike power; it's just that their powers aren't all that powerful.

The Johnsons are typical Kiwi blokes who don't much like to stand out from the crowd. And everyday gods have everyday struggles - striving to love stroppy women, overcoming sibling rivalry and fulfilling your god-like destiny, all while still finding the time to enjoy a few beers with your mates.

On the whole, I find Kiwi dramas to be... well... utterly mindless drivel. I hate saying it, but you know, reviews are supposed to be honest after all. So it was with a great amount of trepidation I sat down to start watching this... what had me determined to 'give it a go' was a long-standing interest in Norse mythology.

What I wasn't expecting was to actually find this series quite enjoyable despite the corniness of some, ok, many of the scenes and situations. Regardless of these, the plot is handled fairly well, is self-consistent (even though some of the Norse God family tree is a little mixed up once it migrates to Midgard's human forms) and the characters perform well within the confines of their Aesir profiles.

Some brilliant casting has been done, but I hate to say it but there was one glaringly bad choice... Mr Shame Cortese doesn't do Loki justice. I'm sorry, but Shane just doesn't pull of the Aesir trickster at all well... Some highlights of casting were, IMHO, Thor - I NEVER expected to see 'Mjolnir' - his hammer - incarnated as a meat tenderiser or a regular claw-hammer that could kill a rabbit at 200m... Odin - Allfather of the Gods, incarnated as a shy, awkward, beer-swilling student-type still 'free of carnal sin' (the irony there is brilliant)... and I absolutely ADORED 'Michele' - the mortal incarnation of the Goddess Sjofn.

Overall, I find myself - much to my surprise - keenly hoping there will be a second series... and if so, I VERY much hope they don't botch it.

Follow the now 8-year-old Angelina Ballerina as she puts her best foot forward and embarks on the next stage in her life.

Angelina enrols at Camembert Academy, a school for the performing arts where she meets new friends and experiences an exciting world of dance, music and performance.