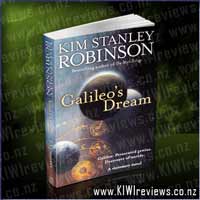 Late Renaissance Italy abounds in alchemy and Aristotle, yet it trembles on the brink of the modern world. In the autumn of 1609, Galileo begins observing the heavens with instruments made in his Padua workshop, assisted by the Venetian artisan Mazzoleni. The Roman Inquisition denounces Galileo and maintains that the telescope reveals only delusions.

But one night a stranger presents a different kind of telescope for Galileo to look through, and Galileo himself is not sure if he is in a dream, an enchantment, a vision, or something else as yet undefined. He will soon find himself straddling two worlds. Inexorably, he faces trial for religious crimes in his own time, while in the new world he discovers, where science assures men that they can perform wonders, but does not tell them what wonders to perform, he is revered.

Take a bag of history, add a few cups of supposition, a dash of third-person narration, a bit of 10-dimensional temporal physics, a hint of paradox... and bake slowly for nearly 580 pages at absolute zero degrees... and you have one kicker of a sci-fi storyline! This one really captured my attention... far more than KSR's 'Mars' series ever did. I was not only drawn in by the story of Galileo, but also the supposition of how the events may have panned out if a time-travelling self-appointed reality-corrector were to have turned up and started to stick his oar into the pond of manifold time.

Galileo has been one of the most inspirational avatars of science in the last millennium... the first true scientist and developer of the methodology of scientific exploration through experimentation and direct observation, he was at once a modest man and a braggart. Self-confessed as one of the greatest minds to have ever lived by that time, he was also reluctant to wear the crown of being the first true great scientist.

In his early years, a devout believer in Ptolemy's theories, he rapidly came to embrace, and then advocate, Copernicus' theories of the heliocentric universe, where the sun was the center about which all other planets rotated, in the same manner as the moon orbited the Earth. This was brought about by his early studies of Jupiter and it's four most easily seen moons: Io, Callisto, Ganymede and Europa. Only the Copernican system explained all the observable features of the solar system, such as the phases of Venus, Lunar and Solar eclipses, and the strange retrograde motions of Mars in the night sky, when it appeared to be moving backwards through the spheres of Ptolemy's Heaven!

Overall, I was utterly enamoured by this book on two fronts... firstly, the historical aspects, though somewhat slightly twisted to better the storyline, were fascinating. I love history presented in such a detailed, yet accessible manner. Secondly, the sci-fi aspects were also brilliantly done, not only giving pause for thought as to the alternative possible causes behind some of Galileo's stranger phrases in his writings, but also just because I love a good temporal paradox plot that somehow manages to keep itself internally consistent. The whole multi-dimensional braided time isotopes theory is utterly new to me, but won't remain so for long.

For those who enjoy a good dose of 'sci' with their 'fi', this is certainly a book you should keep your eyes open for on the local bookshelves.

The future looks bright for Web developers! With Adobe Creative Suite 3 Web Premium, you now have fantastic tools that enable you to create a wide array of content and graphics to deploy on a Web site that is dynamic and easy to maintain.