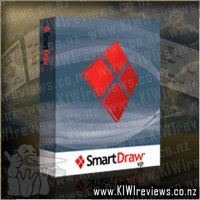 Disclosure StatementFULL DISCLOSURE: A number of units of this product have, at some time, been supplied to KIWIreviews by the company for the purposes of unbiased, independent reviews. No fee was accepted by KIWIreviews or the reviewers themselves - these are genuine, unpaid consumer reviews.
Available:
2011

Before the visual processor, visuals had to be created manually with complex graphics software. Even for experts, producing a visual like a flowchart was time consuming and the results were often not presentation-quality. SmartDraw automates the creation of visuals to such a degree that anyone can do it, and get great results in minutes.

Why Everyone Needs a Visual Processor - The rapid pace of change in the modern business world and the information overload it has caused is a problem we all wrestle with. We need to consume information in a way that can be easily understood in the minimum amount of the time. When you look at information presented visually, you can immediately see the key ideas and the relationships between them, instead of having to take the time to read a 12 page report. A picture really is worth a 1,000 words. Learn more about the visual processor.

Create Every Kind of Visual - SmartDraw includes specialized templates for 70 different types of visual. Everything from flowcharts to floorplans.

Take any process you can imagine, be it as commonplace as making a cup of tea, through to the fabrication and assembly of a complete aircraft... it can all be described in flowcharts, mindmaps, tasksheets or some other graphical format, and retain - if not improve upon - the information content of words, and transmission of concept. "A picture is worth 1,000 words" is a saying so old as to be almost a rule of human nature... especially as humanity speaks so many languages, yet an image, icon or gesture can break past the barriers to understanding and get the message across.

This is the realm of the visual... where our eyes show their primacy in the hierarchy of the senses. This is where SmartDraw reigns supreme.

I needed a flowchart to clarify and help me find the problem with a new promotion being designed... the idea was fairly straight forward, but I needed something that someone else could look at and spot the flaw... using SmartDraw I was able to roughly lay out the basic 'logic' of the process, add in extra subroutines where needed, add comments and clarifications without cluttering up the main flowchart, then pass it on to someone else to see what they saw. Right away they were able to comprehend what I was aiming for, see how the user would be shifted around the website and how each step would trigger a series of 'tests' to see if certain criteria had been met, and what do to if they had or had not...

Sure enough, the flaw was immediately apparent to both of us as soon as we began to trace each logical pathway... a solution was obvious and easily implemented... and now the new promotional tool is fully functional, ready to use and awaits only the right time to flip the switch. From past experience I know that it could have easily taken me weeks to step my way through the code in an attempt to find the problem, which it turned out was more a case of the right action, but implemented at the wrong step in the chain of logic. Searching the code any number of times would not have yielded the true fault. Instead of weeks, SmartDraw helped us solve the problem - and fix it - in under 3 hours!

The application is a breeze to install, and very thrifty on hard-drive real estate, with many modules only being downloaded from the net when first called for, such as the PDF output module. Yes, if you have Acrobat installed, you can simply "print to PDF" but if you choose to use the simplest, one-click option you will need to download a third-party PDF printer driver. This may seem like an annoyance, but you do it only once, and after that it's a 2-click operation to output your visuals as fully-compatible PDF files.

But hardcopy is not even the start of what you can create. One-click integration into the MSOffice suite means instant PowerPoint presentations - complete or individual slides. It means one-click clipart for use in Word, it means a LOT of time saved and some very tidy artwork that would take even a talented designer hours to make in other applications. I would, however, like to see better integration with the Adobe Creative Suite applications such as InDesign, and the OpenOffice suite as well. These are things that may come, or may not.

The user interface will be very familiar to users of MSOffice 2007 or higher. The same taskbar in the top-left, the circular icon that launches the main 'file' menu, and a very similar 'feel' as you work. For some, this will be a turn-off... but for those who value efficient usage over some strange brand anti-loyalty concept, then you'll find this to be easily adapted to, comfortable to use, and very deeply resource-gifted. SmartDraw has deep pockets, wherein all the goodies are nestled away, needing only some time to investigate and some smart decisions to be made. Of particular note and definitely worthy of deep and prolonged investigation are the templates and the symbol libraries. Both of which are readily expandable, infinitely flexible, and whole-heartedly time saving once fully understood. You can even use the 'polygon line' tool to create your own custom shapes, but I would like to see a future version include the ability to import vector shapes from Illustrator or some such, and actually assemble a library of your own custom shapes.

This is especially important when you are using such templates as the "Roads & Intersections" which of course are geared for the American standard of driving on the RIGHT-hand side of the road. You can flip them around the correct way for our driving style, but of course all the roadsigns will go 'mirror-writing' on you... so the ability to edit the images is vital. Alas, there didn't appear tbe an easy way around it... so I got sneaky. Select your chosen symbol and place it on the workpad. While it is still highlighted, Ctrl-C (copy) it, then switch to your chosen image editor. Paste (Ctrl-V for us Windows users) it, edit it as needed, then copy'n'paste it back into SmartDraw. This seems to work fairly well, but keep in mind this will rasterise the image. No more nice pretty sharp lines if you enlarge it, so be sure to grab it in the first place at a size far BIGGER than you want it, if you plan to use this trick. Also be aware that you will need a lot of system resources free, as I tried this with a 6000x6000pixel image, and it crashed when I dropped it back into the chart.

Now when it comes to the predefined libraries of templates and symbol... the biggest strength, and in some ways the biggest annoyance, is the fact that when you install the application, you get only the barest minimum of them installed with it, and an index of what others are available. When you call on further resources, they are downloaded from a central server. This means that you will get all the updated templates, symbol libraries and any other resources available. Why is this also a weakness? It means that whenever you use this application, you need to be hooked up to the internet. No net connection, no new resources available... unless you know someone else with the application and who knows enough to send you copies of the libraries. As long as they have a valid license and authentic, uncracked software, this should be quite acceptable and legal, as these are resources that would be freely available to them if they had 'net connectivity.

Overall, I could VERY easily go on for a dozen more pages about this application, just running through the list of broad categories of what visual aids it can produce... but seriously, the answer is simple - if it's graphical, chances are it can be made in this application. A short list of some of the surprising highlights includes: certificates, crime scene reports, educational resources, roadway diagrams, vehicle layouts, interactive charts, and a whole host of others far, FAR too numerous to list... at least hundreds, possibly thousands even - I'm still trying to absorb the list I have flicked through, let alone the rest! If the price seems too steep... trust me, it's not. For a business it will be invaluable... for an educational establishment, it is priceless. For the home user... -meh- maybe a little pointless unless you also fit into one of the other examples of the prime market this is aimed at. All I can say is that even with the tiny slice of resources I have seen, I can think of so many wonderful ways it will improve and speed up my workflow, as well as improving the resources we have already created but can now recreate ten times better in a tenth of the time.

This Filter is an extended Version of my first Filter called Sinedots. Mayor new features are Antialiasing, color support and slightly more control. I decided to enhance it due to the enourmous positive response.