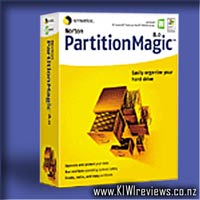 Disclosure StatementFULL DISCLOSURE: A number of units of this product have, at some time, been supplied to KIWIreviews by the company for the purposes of unbiased, independent reviews. No fee was accepted by KIWIreviews or the reviewers themselves - these are genuine, unpaid consumer reviews.
Available:
at good software retailers.

Separate your operating system, applications, documents, music, photos, games, and backup files to reduce the risk of data loss if your system crashes. You can use Norton PartitionMagic 8.0 to run multiple operating systems safely.

Key Features
•  Divides a single hard drive into two or more partitions.
•  Lets you safely run multiple operating systems on the same PC.
•  BootMagic ™ makes it easy to switch between different operating systems.
•  Allows you to copy, move, resize, split, or merge partitions as needed-without losing data.
•  How-to wizards guide you step by step through the partitioning process.
•  Intuitive Windows ®-based browser lets you find, copy and paste files in both Windows and Linux ® partitions.
•  Allows you to create and modify partitions up to 300 GB.*
•  Supports USB 2.0, USB 1.1, and FireWire ® external drives.**
•  Supports FAT, FAT32, NTFS, Ext2, and Ext3 file systems.
•  Converts partitions among FAT, FAT32, and NTFS without losing data.
•  Allows you to enlarge an NTFS partition without restarting your computer.
•  Resizes NTFS system clusters to the most effective size.

*Supports operations on partition sizes as large as 300 GB when partition is less than 90% full. Larger hard drives may require additional memory.

**For these devices, operation on partitions with no open files.

Having played with an earlier version of PM a few years back, and finding that easy enough to figure out after 3 hours of shuffling the drive around like cards. I didn't realise that it action what I told it to, step by step verbatim. I had assumed, in my ignorance, that it just looked at the 'before' layout, and then the 'after' layout and find the shortest 'shift' between the two. So, 3 hours of setting up what became a 146 step process, and then told it to go ahead! It was easier to just stop it half way, wipe the lot and re-image it all back.

So it was with some mental cracking of the knuckles I tackled this latest incarnation of the premiere drive-structure alteration utility. After a fairly quick and uneventful install, it was ready to run, no reboot required. This, is seems is not such a rarity, but I'll get to that later.

It looks like a standard WinXP-style window, with a dynamic list of available options down the left side, and a brilliant, easy to grasp visual representation of the available drives and partitions. The entire system can be driven by intuitive wizards, with only a basic understanding of drive structure required to prevent some acts of sheer stupidity.

This new version was so easy to use, and required only 2 reboots! Most of the alterations were accomplished with just some artificial manipulation of the File Allocation Table in realtime, and away we went, on the fly.

Overall, I found this to be utterly brilliant! However, with a $130 pricetag, this is something you will either have to use a fair bit, or it becomes something a bit excessive. However, for those who set up networks, this will be a great tool for you. Use a disc-image system, such as Norton Ghost then run PM over the system to customise and fine-tune the drive allocations for each system's primary tasks. Should be a lot more efficient and smooth-flowing than fresh-installs for every machine. Another great tool for the carrycase!

This is my first try in creating a photoshop Filter. I choose this old demoeffect because it's nice and easy to implement. I know that it is slow, extremely unintuitive and probably not very useful. Hopefully somebody has ... more...