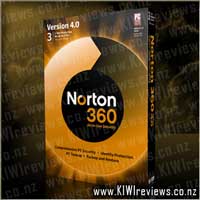 Disclosure StatementFULL DISCLOSURE: A number of units of this product have, at some time, been supplied to KIWIreviews by the company for the purposes of unbiased, independent reviews. No fee was accepted by KIWIreviews or the reviewers themselves - these are genuine, unpaid consumer reviews.
Available:
online, and at quality retailers

Norton 360 has finally taken it's place as the Norton System Works successor. Not only is it feature packed and easy to use, but it's also so slimline and unobtrusive I hardly know the program is acutally working at all.

For all those out there that like Hardware Specs for comparisons here is the test equipment specs.

Installing Norton 360 v4 was a breeze as it has come to be with its new installation system, total install time was a mere 4 minutes (this included a reboot). The downloading of updates was again done at a good clip, however I am on a 10Mb cable connection here so no doubt that helped things along.

CPU usage is absolutely minimal with the program only using about 0.5-1.0% running in the background and 12% at most when performing tasks. This is a huge improvement over the old nortons (pre 2009) and is what is causing Nortons to become the premier AV/Security/System Performance program once again.

Memory usage is also low with it only using around 1%-5% at any time, leavling plenty to run your other apps such as Dreamweaver CS4, and Firefox with 3-4 tabs open at once.

The suite of applications(or tasks as they are now known) in 360 v4 is huge. Of course there is the standard AntiVirus and the Internet Firewall, as well as the Information Security that you can get in the Norton Internet Security Suite, but it's the other options which give this one it's clout.

Firstly we have the 2GB Online backup which is great if you don't have any portable HDD's handy to backup onto, but unless you have unlimited highspeed broadband, and your files aren't overly huge this can become a bit of a costly task. This version also makes use of Nortons Insight which is a way the Symantec have developed to improve the speed of the virus scans. Norton Insight is a database of program details that Symantec have collected and analyised and detemined to be safe, and so are not checked when Nortons does it's background virus scan. Now this might sound a bit unsafe, what if one of those files get infected? Well at startup Nortons does a check of the machines File System and if any of the files in it's database have been modified then their trust is revoked and they are checked with the other files in the next scan.

Tasks that are available in the PC Tuneup section of Norton 360 are thing like Disk Optimization which is a far better version of Windows Disk Defragger, Windows and IE Temporary file cleaner and Internet Explorer History cleaner which all do as they say (which is to remove all the unnessecary excess files that build up in those locaitions. There is also the Registry Cleanup which analyses and repairs any Regisitry errors and unneeded registry keys,and finally is the Startup Manager which allows you to turn on, turn off or delay the running of your startup programs.

With this comprehensive suite of tasks protecting my PC I have no worries about anything untoward happening to my PC.

This package was a joy to review, especially as my faith in the Norton range of products has been firmly restored.

Why Choose Norton Internet Security?
•  IMPROVED! Stops online identity theft, viruses, spyware, bots and more - Guards your PC, online activities, and your identity against all types of Internet threats.
•  IMPROVED! Stops attacks before they get on your PC - Proactively blocks hackers and ... more...