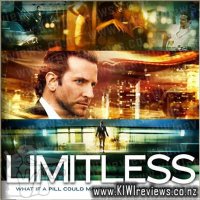 Price:
varies by cinema
Available:
at cinemas near you

Limitless is a paranoia-fueled action thriller about an unpublished writer whose life is transformed by a top-secret smart drug that allows him to use 100% of his brain and become a perfect version of himself.

His enhanced abilities soon attract shadowy forces that threaten his new life in this darkly comic and provocative film.

This is a great movie!

There's a great scene where they follow the main actor all the way across town over hours & hours which is like nothing I've ever seen before - definitely worth looking out for.

I would watch this again and it might possibly go into my classics pile of DVD's to watch over & over again.

You know, as I waited for the movie to start, I found myself convinced I had picked the wrong movie to go and see... the more I thought about it, the more I felt that a sci-fi movie would have been a far better choice... but after sitting through this I was convinced my instincts were bang on.

The movie has comedy, action, thrills, tension, release, morals, ethical dilemmas, doublecrosses, double-doublecrosses, good special effects that didn't wander into 'unbelievable' even a little bit... and an ending that left me wondering... all the hallmarks of a movie I would happily go out and buy on DVD the day it hits the shelves.

Having seen Bradley Cooper in The A-Team recently, and thinking he was a poor choice for 'Faceman', in this film he was indeed perfectly cast. He manages to pull off 'down and out' equally as well as he portrays 'rapid riser'... as stumbling in his 'regular' mode as he was eloquent in his 'perfect' phase. The range of requirements that covers, in speech, action and body language, is extremely broad and it was exciting to see him hit perfect pitch in both modes.

The plot, though an adaptation of a novel and thus well defined previously, I found to be a tad weak in places, very confusing in others, and utterly contradictory in a few rare spots... yet these were so naturally woven into the plot they seemed well placed there, as though the imperfection and incongruity was indeed a natural effect of the VERY messed up state of the main character.

By far, the best part of the plot for me was the last 10 minutes, when it all seems to pull together for him... was he still on the smart drugs, or had he found a way off them yet still retaining his increased mental faculties? The expression on his girlfriend's face asks the question... the nonchalant and somewhat cheeky grin on his doesn't hint at an answer, but clearly indicates he knows the unspoken query... it leaves the end hanging, without leaving the story open to a clear sequel... masterful really.

Overall, this is a great movie... miles above my initial expectations and a real 'dark horse' bolting from the stables. If you only have time to pick one movie this season, this would be a great choice to make IMHO. I know that despite my hesitation, the results were highly enjoyable, very pleasing, and quite unexpected... and no - I don't think he's a vampire in any sense... just amazingly practical... and desperate.

See the movie, you'll know the scene I am talking about.