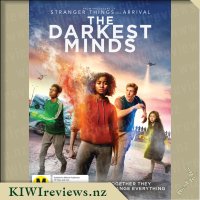 Disclosure StatementFULL DISCLOSURE: A number of units of this product have, at some time, been supplied to KIWIreviews by the company for the purposes of unbiased, independent reviews. No fee was accepted by KIWIreviews or the reviewers themselves - these are genuine, unpaid consumer reviews.
Available:
November 2018

Imprisoned by an adult world that now fears everyone under 18, a group of teens form a resistance group to fight back and reclaim control of their future.

Amandla Stenberg is one of those actors whose star is rising, at the same time she is proud to stand up for what she believes in and this strength is something that shows through in her acting.

Children have begun dying, it's inexplicable, and those who don't die end up with super abilities... Fire, mind control, electricity, telekinesis and enhanced intelligence. All these children are sent to camps where they have no freedom. Ruby manages to hide how strong she is for many years until she is broken out one day and so begins her journey, experiencing freedom, creating a family and working out just where she stands in this new world. The main cast consists of the ragtag group of children who are searching for a haven for children, naturally they run into problems along the way (think bounty hunters). These four kids all did a fab job in their roles and portrayed their characters very well.

The plot was well done, all elements that have been in other books and films, but it flowed well and had a good proportion of slow, streaky moments and fast paced action. The twist at the end wasn't unexpected, both my mother and I went 'knew it!, when it was revealed. The special effects were done well, though there were a couple of moments where you could easily tell that they'd used special effects and so it took away a little from the overall mood. The special features includes looks at each of the main four kids, some behind the scenes info and even a gag reel. There was an extended scene which gives more of a link to the future books, as looking online it doesn't appear likely that there will be another film, a shame as I would have liked to have seen where this story would go, guess I'm going to have to read the books.

This was a well made film, a few little hiccups but nothing that stopped us from enjoying it, the biggest let down would be the lack of planned sequel.

Leonard is an attractive but troubled young man who moves back in with his parents following a suicide attempt and encounters two women in quick succession.

The mysterious and beautiful neighbour Michelle and Sandra, the lovely and caring daughter of a businessman buying out the family's dry-cleaning business.

As the exotic but equally troubled Michelle seems poised to fall for Leonard, and his family pressures him into ... more...