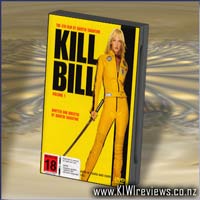 Four years after taking a bullet in the head at her own wedding, the bride (Thurman) emerges from a coma and decides it's time for payback ... with a vengeance! Having been gunned down by her former boss (David Carradine) and his deadly squad of international assassins, it's a kill-or-be-killed fight she didn't start but is determined to finish!

Loaded with explosive action and outrageous humour, it's a must-see motion picture event that had critics everywhere raving!

Uma Therman is one of my most favourire actresses of all time. I love how in most movies I do not even recognise her lol I personally was not very excited about Kill Bill Volume 1, it was my husband that wanted to see it. No surprises there, perfect guy movie - fighting, blood, hot chick lol I am sure if it was him reviewing the movie the scores would possibly be much higher.

Kill Bill volume 1 is a Quentin Tarantino movie. I have a love hate relationship with movies by Tarantino (I both love to hate them or hate to love them lol). I think it takes a special kind of movie lover to really love Tarantinos movies. I even admit I struggled with Pulp Fiction. Kill Bill volume 1 did nothing for me. I found it to be pretty boring and quite long winded. There were some okay moments but all in all it was just not a movie I could really get into.

If you are a huge Tarantino fan then Kill Bill volume 1 will most likely appeal to you and be on your list of favourite movies. The plots a simple one, the story line is easy to follow and if you like sword welding woman then you will enjoy the movie much more than I did.

This film promised gore, but I don't really know if that is how I would describe it. Often more comical than gruesome, this film, has a very graphic novel feel to it. The story, focuses on the woman known only as "The Bride", and her path to vengeance and revenge, and has an ending more fitting to have occurred in a Japanese village, with a flurry of sword dancing.

The plot was not really that complicated, and the back story was really the most interesting part of this film, despite the graphic nature of it. I failed to be captivated by this film, with most of the characters looking rather unrealistic, and poorly portrayed. The saving grace was the fight scenes, which were composed of a well written choreography of punches, and swords. The gushing blood was overkill for me, and provided little in the way of entertainment for me.

Kill Bill Volume 1 Just struck me as more of a parody than a proper action film. I seriously had higher expectations after the nonsensical, but engaging Pulp Fiction, but this was just lacking in too many areas for me to enjoy. If you like swords, then you'll enjoy the fight scenes, but beyond that, it provides little else.

With all the hype associated to this movie I expected more than what was delivered. But, unfortunately, thats one of the pitfalls of the massive marketing machine (MMM). I think if I had seen it before the MMM unleashed it's might, my expectations might have been less. I could, therefore, have enjoyed the movie for the pure value of entertainment & absolutely no grip to reality.

Uma just didn't pull off the lethal heroine but was captivating if only for her stature and costumes. She may have been just a wee bit more believable if, after the gory fight scene (yes, you all know what scene), she had looked slightly more scathed instead of drop dead gorgeous.

Lucy as the evil vixen was superb even if she did, eventually, lose her head!

The movie was undoubtedly captured a style synonymous to Tarantino. Dismemberments, gushing blood, and gravity defying fight scenes made this movie.

Whilst the movie seemed far removed from reality and the fight scenes totally unbelievable, if you feel like a drift into fantasy, you could enjoy this movie.

I was first introduced to the world of Tarantino movies when I accidentally caught Pulp Fiction in the back of the head at a video store. It fell off the shelf while I was commenting about 'nothing different on the shelves these days' - I took it as a sign to try this movie, which I had passed over a couple of times already. You should always pay attention when something literally leaps out at you.

I was impressed. So, I thought it might be worth seeing some more fruits of Quentin's labours. So, onwards to Dusk 'til Dawn, the vampire bloodbath movie. Not as impressive at all. So when Kill Bill came to the cinema, I decided not to risk it. Wait until it's available for hire.

So, the day arrives when I get my hands on the DVD. Grab the bottle of coke, the bowl of freshly cooked popcorn, a comfy bed to curl up in and press play.

My first reaction... "Holy Hell! Does this guy just enjoy blood or what!" But it was a hollywood bloodfest, with blood spraying out in constant high-pressure fountains... not at all realistic, but very symbolic. It really did look corny. "So, if it was that lame, why the high Special Effects score?" you ask... simple... the swordfights were ASTOUNDINGLY AWESOME!

As a swordsman myself, I appreciate a bit of well choreographed swordplay... this was beyond anything I have seen before. A few of the moves looked a little John Woo'ish, but overall this was by far the best swordfighting I have seen in over a decade. This even leaves Rutger Hauer's 'Blind Fury' for dead, and that one was my all-time fave!

Overall, this was a fairly good movie. Don't think I'll be watching it often, and when I do it will be mostly the combat scenes I will pay attention to, but it certainly going to be a hit with all the violence junkies out there. You know who you are, so stop playing Doom 3 for a bit and watch this! :) I am certainly interested to see where Kill Bill - vol 2 takes the storyline. Obviously the next few entries on The Bride's Kill List... but it's the journey, not the destination, that makes the trip worthwhile.

From the beloved best-selling series of books comes "The Spiderwick Chronicles," a fantasy adventure for the child in all of us. Peculiar things start to happen the moment the Grace family (Jared, his twin brother Simon, sister Mallory and their mom) leave New York and move into the secluded old house once owned by their great, great uncle Arthur Spiderwick.

Unable to explain the strange disappearances and accidents that seem to be ... more...