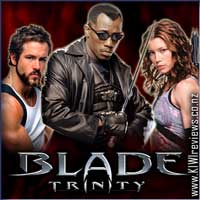 A group of vampires travels to the desert to resurrect Dracula. In his resurrected form, he is called Drake, and he has new gifts, including the ability to exist in daylight.

The vampires launch a campaign against their nemesis, Blade, and his mentor, Whistler. Blade and Whistler's only hope is to team with the Nightstalkers, a group of human vampire hunters lead by Whistler's daughter, Abigail and Hannibal King, a somewhat erratic ex-vampire.

But can Blade stand up to the father of all vampires, the original, Dracula himself?

The start of this film had me interested. The idea of the vampires using their familiars to turn the humans against Blade, so that he was fighting a battle from two fronts, well it was genius. I enjoyed the concept that the humans were no longer just weak creatures, waiting to be either killed or protected, but actually capable of fighting and protecting themselves.

The addition of Jessica Biel to the cast was also very interesting. Apart from Kate Beckinsale, Biel is the only other actress that has managed to portray a strong female character in these vampire style movies.

The plot in itself was very much just a continuation of the second film, where the vampires are trying to become immune to their weaknesses, but it very quickly became obvious that they had no real storyline to it. I was rather disappointed to have the quality drop so rapidly. Ryan Reynolds did little for me; the arrogance and reckless nature of his character, was more irritating than humourous.

The fighting scenes were still to quite a high standard, and were fun to watch, but you can't help but feel sword fights are rather pointless in the age of projectile weapons. The initial plot was so engaging, that I hope that this film gets remade in years to come, with a better follow up story, but this ending to the trilogy failed to really provide a satisfying closure.

Okay, I adored this movie, I loved the special effects, the humour, oh, and a slightly undressed Ryan Reynolds...
Admittedly the plot was rather thin in (a lot of) places, and Wesley Snipes couldn't act his way out of a wet paper bag but there are things that make up for this - one of which being the previously mentioned Ryan Reynolds. The man has a delightfully dry humour that really makes this movie worth watching, not to mention exceptional comic timing. He does okay with the whole action thing as well.
But, if you want an awesome new action star? Check out Jessica Biel! She does a fantastic job as a butt-kicking vampire slayer, and she is pretty darn believeable...
Worth watching once... at least :)

OK, I LOVED the original Blade movie. It was unique, innovative, and almost believable. The sequel was a bit rank, with some seriously bad special effect scenes (particularly the ones with the jumping.) So it was with some trepidation that I sat down to watch this, the third installment of the Daywalker Saga.

About half way through I was starting to see some predictable plot elements showing up, and King's humour was really making me laugh. The guy is just messed-up in the head, giving him some seriously funny moments.

The action scenes were quite powerfully done, with some STUNNING sword scenes near the end, between Blade and Drake/Dracula... but the storyline was rather weak in places, showing obvious signs of the scriptwriters saying "Oh blast, what are we going to fill this empty bit with? Ah! Blood! Yes, more blood!" - as evidenced by the contents of the guarded warehouse. (No, I am NOT going to tell you what the vampire's "Ultimate Solution" is. But of course it'll involve blood, what doesn't in a vampire movie?)

Overall, this was not as good as the first movie, but not as sloppy or lame as the second, so it's not too bad really. I probably won't get this in my collection until it's in the bargain bins at the local DVD retailer.

Score: 9.5
Product reviews for listing 5184: Back to the Future
Directed by Robert Zemeckis

During his often hysterical, always amazing trip back in time, Marty must make certain his teenage parents-to-be, Crispin Glover and Lea Thompson, meet and fall in love - so he can get back to the future.