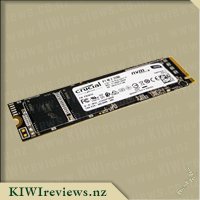 Whether you are trying to get in the game faster or store all your precious memories, the Crucial P1 SSD delivers. Capacities start at 500GB and scale to 2TB.

The Crucial P1 SSD delivers category-leading, real-world performance. PCMark 8 benchmarks show that the drive is capable of mixed-mode throughputs of up to 565MB/s, with a composite score of 5,084, which outperforms similar SSDs within the price category.

With sequential read/write speeds up to 2,000/1,700 MB/s, the P1 provides unwavering performance via hybrid-dynamic write acceleration, a unique SLC cache implementation. The drive offers an MTTF of 1.8 million hours and an endurance of up to 200TB total bytes written, with power usage at an active average of 100mW. The Crucial P1 SSD leverages the NVMe PCIe interface and Micron's leading-edge QLC technology to deliver fast capacity for less.

•  Room to Spare - Securely load and store up to 2TB of important files on Micron NAND in a tiny M.2 form factor.
•  Vital Performance - NVMe PCIe technology delivers sequential read/write speeds up to 2,000/1,750 MB/s so you can hammer out your work and compete online faster than ever before.
•  Lasting Value - The Crucial P1 SSD is designed to be the only storage upgrade you'll need with an affordable blend of performance and capacity.
•  5-year Limited Warranty - We back thousands of validation hours, dozens of qualification tests, and a heritage of award-winning SSDs with a 5-year limited warranty.

SSDs have been in the consumer space for quite some time, and the technology is maturing rapidly which helps in a number of ways. It drives innovation, improvement and the price down by having paid off a lot of the hefty initial R&D that went into the early generations. Even with that in mind 3D QLC NAND is still quite new and is really only now reaching a point where consumer-level hardware is hitting shelves within the affordable price range for the average Joe User. Roll on the Crucial P1 M.2 NVMe drive. Available in 500MB, 1TB and 2TB capacities - though the 2TB is still rare to find in NZ - it's the latest in a range of PCI-e based Solid State Drives that fit into the M.2 port on more modern motherboards and some portable devices.

Endurance is a factor in solid-state drives - the cells will eventually stop responding to change-of-state commands and effectively die. Memory cells at the start of the queue will get hammered while those in the higher addresses - at the end of the queue - will last longer due to not being flipped so often, so lifespans have to be given as 'the device as a whole' and you'll start to see memory errors well before you reach this marker. This drive claims to remain reliable for a total of 200TBW (TeraBytes Written) which means each cell survives an average of 200 state-flips. When you think of how many times Windows writes to the cache, that's really not too impressive... especially when some of the competing devices out there have specs up to 8x better in terms of lifespan, and many regular SSD drives offer at least double.

Power usage is one of the aspects where this drive shines fairly brightly. It supports some very low power usage, with as little as 80mW in it's lowest power state, and a maximum of about 8W according to the specs. Realistically, I don't have the gear to measure that accurately, but I can look at my system overall and using this drive instead of a regular SSD did show power savings. If you were to replace a regular hard disc drive with this unit, you would certainly notice a lower power drain, less heat being generated, and a LOT quieter system. You could basically unplug most of your fans, leaving only the CPU and video card fans powered up.

The speed specs make this drive look pretty good - 2 gigaBYTES per second read and 1.7 gigabytes per second write speeds are impressive by any standards, leaving the 6 gigaBITs per second of the SATA II interface in the dust, and this is achieved by the integration of Crucial's Hybrid-Dynamic Write Acceleration technology. However not all that glitters is gold, and not all real-world scenarios will give you such glittering results. These stunning specs are the results of carefully controlled laboratory conditions, some fancy maths, and a bit of hands-on testing, while the real world can be a lot messier and chaotic, causing data streams to flow less smoothly. Because this site talks to the average user, not the ubergeeks, I won't go into the testing methodology I used - it involves applications such a SysMark, diskbench and PC Mark 8 and it's just a bunch of random numbers to most people - but the results, when combined with the factors noted above, had this drive sitting firmly in the "average or below" category.

In many speed tests, it was on-par with SATA SSDs, making it's biggest contribution being a massive saving in terms of space and power consumption, and lagged a fair bit in terms of responsiveness. On the flip-side, it was lightning fast when it came to installing new apps, moved files around impressively quickly, and really showed its stuff with the sequential write saturation tests. The result of this shows where it's real strength lies - acting as a media cache drive for applications that need a lot of high-speed storage such as video editing applications, photoshop and gaming, despite the low reliability ratings.

Overall, all factors taken into account, I personally would not be inclinded to use this as a system drive. It doesn't support AES 256-bit hardware encryption - likely as a way to boost the performance measures - and after formatting it I got a little over 930GB of usable space. Some of the lost space was taken up with formatting data, and the rest I assume was used as part of the floating dynamic cache system... at least I hope so, because if it plans to steal another 150GB off me for the cache that makes the usable space on this far lower than it should be. Add to that the lower lifespan of this unit, for me a regular SSD being more reliable and no less appealing in terms of performance, it's entirely out as a boot drive for me, and even as a cache drive I doubt it would last long the way I hammer RAM with video and photoshop tasks. Thankfully, I'm not much of a gamer, or it wouldn't be something I would even bother installing at all. As a 'first in the family' device for Crucial, it is passable, but it's still not on the leading edge against competing devices. I'd like to see it mature a bit more, and take on board some of the tricks it's peers are using to give more speed and better endurance. Roll on the next iteration!

This cable may look like any ordinary cable, but it is not! It provides a fast and simple way to transfer data between computers without additional software or a network connection. The software is embedded in the 2MB memory of the USB cable, so just plug and play.