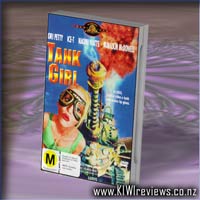 Disclosure StatementFULL DISCLOSURE: A number of units of this product have, at some time, been supplied to KIWIreviews by the company for the purposes of unbiased, independent reviews. No fee was accepted by KIWIreviews or the reviewers themselves - these are genuine, unpaid consumer reviews.
Available:
16th December 2004

In 2033, justice rides a tank and wears lip gloss.

Tank Girl and her friends are the only remaining citizens living in the wasteland that is Earth. Here they are forced to fight the evil mega corporation and government that runs the territory.

This movie is an absolute classic in my opinion. The female answer to Mad Max. Set in a post-apocalyptic Australia. Water and power is scarce and human beings fight each other over diminishing resources.

This movie is based on a comic book. But I didn't know that before I watched it. The characters are definitely on the kooky side. There's action and drama but loads of comedy as well.

The character Tank Girl is strong, funny and has moxy. Even though some terrible stuff happens, she keeps on trucking. As a teenager at the time, I loved her character and wanted to be her. I even considered a new haircut. But I didnt go that extreme.

There's plenty of sexualised symbolism in the film, that is in keeping with the comic. Girls operating heavy machinery, guns and large vehicles, all phallic symbols. That kept my film student mind quite busy watching it the first time.

I've seen this film so many times since that first time and it never gets old. Its our stable, having some drinks and staying up late movie. It may not have the best effects or be particularly believable, but it reminds me of my mis-spent youth. The film itself was never a huge success. But like the comics, it has its cult status and its die-hard fans.

Ever wondered what would happen if all the water on earth went underground, or evaporated, leaving just dust. Lots and lots of sand and dust? Here's what...

With an assortment of strange characters, including creatures artificially evolved from kangaroos, a lunatic in charge of the entire remaining water supply, brothels where all the women are brainwashed into being almost clones, and grud-knows what else out there. Tanks, fighter planes, guns, more guns, and (just for a change) lots more guns... it's all very hammed up really.

But that's what makes it funny! Lori Petty does a great job as rebellious Tank Girl, Malcolm McDowell as Kesslee, the water baron, and a barely recognisable Ice-T as one of the Rippers, those kangaroo critters I mentioned earlier.

With a very basic plot, there is still room for a lot of action, some surprising twists, and some just downright wierd moments. Couple this with a somewhat novel narrative style and hand-drawn cartoon bridge scenes, you have one funny way to make a statement. You can even throw in a killer soundtrack to boot.

Overall, this is a classic. Based on a warped comic series, and with a star cast, you'll find yourself sitting there watching it with a somewhat stunned look, interspersed with laughing fits that will make your sides burst. I loved it, it joins my library in the 'What the...?!' section, reserved for titles that you can't get a handle on, but just really find yourself getting into anyways.

Henry Brogan is an elite 51-year-old assassin who's ready to call it quits after completing his 72nd job. His plans get turned upside down when he becomes the target of a mysterious operative who can seemingly predict his every move. To his horror, Brogan soon learns that the man who's trying to kill him is a younger, faster, cloned version of himself.