ProdID: 7860 - Battle Of The Sexes
Directed by Jonathan Dayton and Valerie Faris 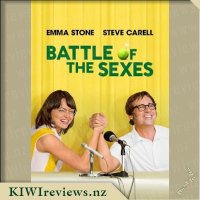 Disclosure StatementFULL DISCLOSURE: A number of units of this product have, at some time, been supplied to KIWIreviews by the company for the purposes of unbiased, independent reviews. No fee was accepted by KIWIreviews or the reviewers themselves - these are genuine, unpaid consumer reviews.
Available:
January 2017

Battle Of The Sexes product reviews

I first thought the title of this movie was just a gimmick to attract viewers with the use of a catch phrase, but then discovered that this term was used historically to refer to the two 1973 matches between Bobby Riggs (Steve Carell) and Margaret Court (Jessica McNamee), and later between Bobby Riggs and Billie Jean King (Emma Stone). This makes the title entirely fitting as not only do these two matches feature prominently in the storyline, but there is also the political background to the movie which highlights the gender discrimination that was being challenged at that time.

Tennis is the background to this challenge - and the game of tennis is the real star of the movie. As someone who is not especially knowledgeable about any sport not based in or around the water, I was nonetheless able to follow the matches and found I actually learned something about the progress and scoring system. In this respect the camera angles were well planned to maintain audience interest and involvement; some of the follow shots were perfect. Incidentally, I was amazed to see that both King and Riggs played in glasses, and found I was sometimes distracted as I wondered if they ever fell off in mid serve!

The different points of view of the main characters are presented in true soap opera style complete with stock characters who conform to their stereotypes. From the self-styled "male chauvinist pig" Bobby Riggs (who at times reminded me of Mike Myers in his best Austin Powers moments) to the "come on, be reasonable" attitude of promoter Jack Kramer (Bill Pullman) when confronted about his bias towards the treatment of male tennis players, there are times when the action turns to high comedy. Insults fly in both directions as the men accuse the women of unrealistic ambitions including their insistence on pay equity, and the women accuse the men of being elitist. This makes for an enjoyable (if predictable) viewer experience. Some of the game-show style pre-match banter is especially riveting, with a serious message underlying the clowning.

The very start of the movie was engaging; I thought it was going to be compulsive viewing until the first scenes dealing with the start of King's and Marilyn Barnett (Andrea Riseborough)'s relationship. In fact, I was then tempted to turn the video off altogether because these scenes just did not work. They were tacky and predictable, and badly cut with too much emphasis on the "schmaltz" aspects which made me cringe. Shades of B grade romances from the '50s and '60s spring to mind - Mills and Boon for the big screen! Luckily this initial portrayal of their affair does not last; the later encounters are more believable and better integrated into the main plot. King's private life was secondary to her career as a tennis pro and her stance on gender equality on and off the court so, while highly relevant, should not have been included gratuitously.

My reaction to the movie is mixed. I thought it was too long; the earlier part of King's and Barnett's relationship and some of the interaction between Riggs and his wife Priscilla (Elisabeth Shue) were redundant to the plot, tending to weigh down what was otherwise a fast-paced story. The high points for me were the camera work in the match scenes, which really captured my attention, and the repartee between the protagonists when they were arguing about gender equity both on and off the tennis court. The political ramifications (for other human rights such as racial and LGBT) are implicit by extension. This is summed up in the line from King, in response to a question from Barnett: "Iâ ™m going to be the best, that way I can really change things."

A 12-year-old boy searches for the one thing that will enable him to win the affection of the girl of his dreams. To find it he must discover the story of the Lorax, the grumpy yet charming creature who fights to protect his world.