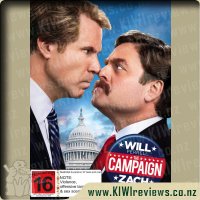 When long-term congressman Cam Brady (Will Ferrell) commits a major public gaffe before an upcoming election, a pair of ultra-wealthy CEOs plot to put up a rival candidate and gain influence over their North Carolina district. Their man: naïve Marty Huggins (Zach Galifianakis), director of the local Tourism Centre.

At first, Marty appears to be the unlikeliest possible choice but, with the help of his new benefactors' support, a cutthroat campaign manager and his family's political connections, he soon becomes a contender who gives the charismatic Cam plenty to worry about.

As Election Day closes in, the two are locked in a dead heat, with insults quickly escalating to injury until all they care about is burying each other, in this mud-slinging, back-stabbing, home-wrecking comedy from Meet the Parents director Jay Roach that takes today's political circus to its logical next level. Because even when you think campaign ethics have hit rock bottom, there's room to dig a whole lot deeper.

Cam Brady has been a congressman for years, always winning each election because no one else puts their name down, even though he isn't the best for the job, just in it for the power. Two wealthy CEO's want him out and someone easily influenced in his place so that they can do their evil work in their district. Enter Marty Huggins, a very caring, but slightly dim, local tourism centre director. It's nothing new or innovative, but is an ok storyline for a Will Ferrell movie.

The jokes are ok but it just isn't as funny on the second viewing. There are some scenes that have you laughing while crying out 'oh my god' but on that second viewing, it just doesn't have that shock factor any more and so just isn't as funny any more. The characters seems so wooden and so there wasn't anything to really go back for. It's fun to see some actors that I quite like in the movie but there was nothing really great about this movie.

We own this, but I am in no rush to watch this again, and in fact most likely won't any time soon.

In this new comedy, Amy has a seemingly perfect life - a great marriage, over-achieving kids, beautiful home and a career. However she's over-worked, over-committed and exhausted to the point that she's about to snap. Fed up, she joins forces with two other over-stressed moms on a quest to liberate themselves from conventional responsibilities - going on a wild, un-mom-like binge of long overdue freedom, fun and self-indulgence - putting them on a collision course with PTA Queen Bee Gwendolyn and her clique of devoted perfect moms.