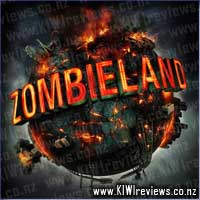 The horror comedy Zombieland focuses on two men who have found a way to survive a world overrun by zombies. Columbus is a big wuss - but when you're afraid of being eaten by zombies, fear can keep you alive. Tallahassee is an AK-toting, zombie-slaying' bad ass whose single determination is to get the last Twinkie on earth.

As they join forces with Wichita and Little Rock, who have also found unique ways to survive the zombie mayhem, they will have to determine which is worse: relying on each other or succumbing to the zombies.

My husband is a HUGE zombie movie fan if there is a movie or tv show about zombies he has bound to have seen it and 9 times out of 10 it means I have seen it as well. Most of the time I watch them and some aren't too bad but considering I'm more of a comedy fan I end up finding they are same old same old after a while. I wasn't sure what to expect with Zombieland I sat down expecting more of the same as always.

I was surprised when the movie started it was completely different to most zombie movies and I found myself laughing throughout it. Its such a different take on the surviving zombies. First you have the guy who appears to be scared of his own shadow, then you have the macho man who's one aim is to find a twinkie, then comes the girls who are in a whole league of their own.

The casting is spot on and they all do so well in their characters and Bill Murrays cameo in the film is one of my favourite parts. The movie is a funny light hearted take on zombie movies which seem to be everywhere these days. I would recommend it to anyone who would likes Zombie movies.

This has managed to make my top 10 films. I absolutely love my zombie films, and this is in my opinion, a well made zombie film. More of a narrative comedy, than a dark zombie film, we see that despite the fact that humanity has largely been reduced to a population of slow, but flesh-hungry zombies, that the surviving human population will always find a way to bicker amongst themselves.

Portrayed as a mix of narrative journal, and a 'how to' regarding surviving a zombie apocalypse, Zombieland is a light hearted film that, similar to the 'Family Guy' television show, will try to make an important point, and immediately have it follow up with an example to prove the point. Occasionally using flashbacks, but often using 'unexplored' areas as examples.

Bill Murray's small role in this film does much to ensure that the film remains light, and is a welcome addition to the cast. Despite the fact that it is a zombie film, the surviving group manage to stay largely intact and they all manage to get what they are looking for by the end, rounding up a very happy 'family'. If not for the blood, gore, and cannibalism, it would have made a great family film about overcoming adversity.

As it is, it's still a favourite, and shall remain in my physical collection.

I watched this when it first came out on DVD, and recently rewatched it which is what made me think to see if it was available on here to write a review for.

When it first came out I wasn't too sure what to think. I wasn't that big on zombies but love a good comedy. So when it came out on DVD we thought that we would give it a go, and I'm glad that we did.

There's four great characters in it (though Little Rock doesn't actually seem to have too big a roll other than to help us see what kind of a person her big sister is). But they all played their role really well, and the characters felt pretty natural.

My favourite part would have to be 'Zombie Kill of the Week' and also Bill Murray's death in the movie. Oh, and one little random fact for you. The much sought after Twinkie that Tallahassee finally got to eat was 100% vegan for Woody Harrelson.

I'm glad that I own this movie, as it is a fun film. So if you like zombies and you like comedy, then this is a great mixture of the two (plus a little romance)

But now that I have cleared that up, you should check out this movie, it goes along at a great pace, and has lots of things to keep you amused as you go along for the ride. And what's a movie without Bill Murray in it, he makes a good cameo as himself.

It's not a highly intellectual film, and it didn't win any Oscars, but it is what it is, and any movie that makes me want to watch it twice isn't a bad movie to check out.

I wasn't entirely sure what to expect, going into this film. I had previously seen films like Shaun of the Dead (Comedic Zombies), 28 Days Later (Serious-ish Zombies), and Resident Evil (Definitely Scary Zombies) and on the grand scale of Zombie scariness, I would have to rate this film both at the top and the bottom. The zombies were really well done, gross, gorey and the butt of most of the jokes. Killing them raised a lot of laughs, but when they were chasing the main characters they definitely had me on the edge of my seat.

As for the main story, I was plesantly surprised by some of the twists and turns that hadn't been spoilt by the trailers. Jesse Eisenberg brought a real Adventureland / Superbad sort of feel to the film which, when combined with terrifying zombies, made one guy's quest to 'brush a girl's hair behind her ear' a ridiculously cute and hilarious adventure. Even better, was the character of Tallahassee, who would go to any lengths to find the last Twinkie on earth. Of course me, being non-american, had to wait until the end of the movie to work out what a 'Twinkie' even was.

There is lots of swearing, gore and sexual innuendos in this film, so if you don't go for that sort of thing, don't watch it. Otherwise, it's a genuinely funny ride that I highly recommend seeing this summer.