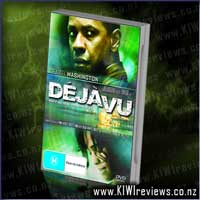 Called in to investigate a suspected terrorist bombing of a ferryboat carrying a group of sailors and civilians, ATF agent Doug Carlin discovers a series of strange anomalies that lead him to believe one of the bodies was killed before the explosion and made to look like just another victim.

After impressing one of the lead FBI investigators, Carlin is invited to join the FBI team as they use cutting-edge technology to try and find the terrorist. It soon becomes apparent to the sharp-eyed Carlin that there is far more to this new technological tool than he has been told, and as the movie progresses, he becomes a vital driver of the investigation into the death of the young woman found washed up on the shore before the bomb went off, and thus the terrorist attack itself.

As the plot unravels, time itself becomes twisted around this one event, and Doug Carlin's life will never be the same again...

I highly enjoyed this film. Denzel Washington is one of those actors that either; can make any movie great, or only chooses good scripts. Either way, he is the type of actor whose name you look for, when trying to find a good film.

This movie has a very convoluted plot that is constantly wrapping over itself, and rewriting what has happened, eventually exposing the end timeline. You would need a fleet of continuity supervisors in a film like this, because the exact placement of things needs to be precise, and every little detail is revisited, and investigated often on multiple occasions.

It was a great movie to watch as it forced you to take notice of everything, reminding you of the consequences; the entire structure of the film is mixed up, with the opening scene, really being the closing scene of an altered timeline.

'Altered timeline' is the important phrase here. This film follows a single timeline theory, where any change in the past can affect the future (as opposed to the idea, that there are an infinite number of universes, where each decision creates another universe that covers all possibilities). The idea that one could change the past is an important theme, and limitations are often placed to prevent the film from becoming too nonsensical.

oh oh oh OH! I So know what I want for Christmas... one of these time/space twister thingies!

When I first saw the shorts for this movie, I admit I wasn't too sure what it was about, or what to expect... but I thought it looked good enough to at least wait until it was out on DVD and give it a go... so when I got the DVD, I slapped the electric blanket on full, grabbed a bottle of coke and settled back to enjoy a relaxing "night in at the movies" in comfort. That was, if it was a dud, I was at least able to get a good snooze.

I need not have bothered, within 20 minutes I was hooked... this is like CSI meets "The Light of Other Days" by Arthur C. Clarke and Stephen Baxter... wormholes, temporal viewing, TLCs (Time-Like Curves) that bypass the rules of paradox... this stuff is breakfast cereal for SCI-fi nuts like me... throw into that mix some serious detective work and forensic pathology... mate, this one is a dead winner!

Not usually a great fan of either Denzel Washington or Val Kilmer (having seen them in too many roles that left me cold) it was refreshing to see them both actually making a good job of these roles... though Val was a little flat in places, but then, he is playing an FBI operative with a marginal imagination at best. They both actually managed to pull this off pretty well, impressively so in fact.

I was totally enthralled by the (eventual) explaination of the technology behind the 'magic eye' camera, and even though the "Snow White" cover-story is almost plausible, knowing a little bit about the theory of wormholes (thanks to reading some stuff by Stephen Hawking) the'real' explaination made a lot more sense. So saying, I think their comment about "4 days and 6 hours, no more and no less..." was utterly hokey... once a wormhole is established (requiring a BOOTLOAD of power intially) you should be able to easily adjust it's temporal focus closer to 'now' by lowering the power you feed into the generator. Much in the same way as cooking on the stovetop... a heap of juice to get the food hot, and then only a trickle to keep it there, or lower the powerflow to lower the average temperature.

Overall, a stunning movie that has action, intrigue, big science, crisp plot with enough of a twist to keep you staring at the screen, yet not so twisted as to lose you. Even the nice little time-prezel at the end was nice, but not too messy, and the hints throughout the movie added up cleanly as the climax approached. Extremely well done, and only slightly out of the realm of believable... after all, we can but only hope no-one has such technology right now, or we are ALL in serious trouble!

Score: 10.0
Product reviews for listing 1928: Pump Up the Volume
Directed by Allan Moyle

By day Mark Hunter is a quiet, studious high school senior. But at night he becomes the sex-obsessed Hard Harry, the mysterious DJ broadcasting from his basement on his pirate radio transmitter, beaming out a mantra of social commentary and teenage angst, punctuated by outbursts of gangsta rap and punk rock.

When his sworn nemesis, the school principal declares war and vows to bring "Harry" to justice for broadcasting without a ... more...