P.S I Love You review 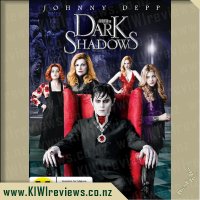 In the year 1750, Joshua and Naomi Collins, with young son Barnabas, set sail from England to start a new life in America, where they build a fishing empire in the coastal Maine town that comes to carry their name: Collinsport. Two decades pass and Barnabas (Johnny Depp) has the world at his feet. The master of Collinwood Manor, Barnabas is rich, powerful and an inveterate playboy... until he makes the grave mistake of falling in love with a beauty named Josette.

I am a big Johnny Depp fan and so this was a must see when it came out on DVD and eventually I grabbed a copy to own when the local video store was selling it for nice and cheap.

I knew this was based upon a TV series, but having never seen it there was nothing there for me to compare it to, so that wasn't a bad thing. The movie is about Barnabas Collins who's parents are killed, his beloved bewitched into killing herself, his family cursed and himself made a vampire by a spurned witch. Skip forward two hundred years, of which he has spent buried alive and she gaining great status in the town. What follows is Barnabas trying to regain the family name as he falls in love again and attempts to rid himself of his curse.

Everyone does a good job in this, though Victoria irks me more than anything and I could have done with someone else acting out that role. The plot isn't anything amazing or fantastic, but I found it fun and quirky, which is enough for me. Some of the special effects are quite cheesy, but that doesn't push me away from this movie, I feel it fits in well with the rest of the vibe of this movie. A fun film and one I will watch again.

Your Mind Is The Scene Of The Crime

Dom Cobb (Leonardo DiCaprio) is a skilled thief, the absolute best in the dangerous art of extraction: stealing valuable secrets from deep within the subconscious during the dream state when the mind is at its most vulnerable. Cobb's rare ability has made him a coveted player in this treacherous new world of corporate espionage, but it has also made him an international fugitive and cost him ... more...