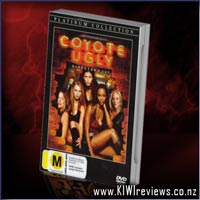 A romantic comedy, Coyote Ugly is the story of one girl's wild adventures in the big city.

Velvet-voiced 21-year-old Violet Stanford heads to New York to pursue her dream of becoming a songwriter. Her aspirations are sidelined by the notoriety she receives at her 'day' job as a barmaid at Coyote Ugly, the hottest spot in town. The club features a team of sexy, enterprising women who tantalise customers and the media alike with outrageous antics.

I love the music that was used in the movie so would watch it again just to hear the songs but lucky the movie had a great story and lots of laughs to offer as well.

The story follows Violet as she moves to New York to try and get a career as a songwriter, only problem is that she can't get her music heard and she has a fear of performing her own music. She gets a job as a barmaid at the hottest bar in town and tries to make things work. There are a lot of laughs as she tries to fit in and advance her career.

She does meet a great guy who helps her overcome her stage fright. The movie has a lot of great music and catchy tunes (I have the soundtrack and listen to it often). I have this on DVD and watch it often, singing along rather loudly and off tune (much to my kids disgust) but loving every minute.

Okay I am a bit of a sucker for romance movies like these I think it is because I am such a softie. When this movie came out I was just a teenager and it became a real favourite for me which I would watch over and over on the rainy days when I had nowhere to be. I think it makes a great movie for teenagers as it has the comedy and romance and the storyline of a young girl trying to make it big is one i'm sure a lot of teenagers can relate to.

I loved the Leanne Rhymes song under the moonlight that is thrashed in this movie so that made it even more appealing to me. The movie follows the storyline of a young woman who is a songwriter trying to get her songs heard in New York. The character Violet has a lot of trouble trying to get herself out there and New York wasn't the experience she thought it would be, so she takes on a job as a barmaid at a hot bar Coyote Ugly.

She becomes a great bar maid and meets a really nice guy and eventually gets her song heard through a open mic night. With a guest appearance by Leann Rhymes at the end of the movie singing the song Under the Moonlight when Violet has made it as a songwriter. It is a really heart touching movie with plenty of comical moments that I think a lot of girls would enjoy.

This is a tale of a small town girl, arriving in the big city with a dream. The film follows her struggles with the culture shock that is a move like this. Its like the ultimate American dream tale. In the same style as many many others. Most recently it made me think of Rock of Ages. Along the way she does a few things she isn't proud of, including bar top dancing.

It is not often you get a movie that has talented actors, a kicking soundtrack, a decent storyline, and some awesome comedy moments. This is a rare gem well worth the effort and cost of hiring or buying. Piper Perabo stars as Violet, a young singer-songwriter who has left Hicksville and headed to the big city to find fame, fortune and success. What she finds instead is a harsh world where no-one wants to help you unless it helps them more, where even when you have next to nothing, someone will steal it and where a job can be found around any corner, but keeping it is a mission and a half. The troubles Violet faces, the loss her father feels, their confrontation when he visits her at work, her trials and tribulations trying to make it big in the music world, it all adds up to a really enjoyable movie that is worth seeing. Featuring the delightful and talented LeAnn Rimes, this is a real winner.