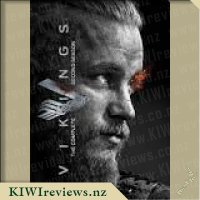 Muster your courage for a second riveting journey into the savage world of VIKINGS.

Season Two follows the ongoing fortunes of Ragner, the Norse warrior who has now become a respected leader on and off the battleground.

But more power brings an onslaught of deadly threats and impossible choices. As he prepares to cross swords with his own brother, Rollo, Ragner is torn between his wife Lagertha and his lover Princess Aslaug.... with his son Bjorn, now a young man and fierce fighter, caught in the middle.

All the while, Ragner boldy invades the kingdom of england, home to vast treasures and a treacherous king who could pose the ultimate threat.

Ever since I finished watching the first season I have been dying to know what happened to Ragner and the rest of the Vikings. I especially wanted to see Ragners reaction to finding out his daughter had died. So as it was my husbands birthday last week what better present then a DVD I know he wanted (2 birds 1 stone). For the past four nights we have been watching the ten episodes, each only 44 minutes long and now are both excited about the prospect of watching season three (also brought him).

I found I was not as emotionally involved with this season and while I still enjoyed it I found it was rather slow at setting the scenes up. Last season I thought it was on par with Game of Thrones but as we watched the current episode on Monday before continuing on with this DVD I found they were worlds apart and the production quality could not even compete. The budget is definitely not the same. The acting and the story are not even on the same level, which is sad as this series really is being undervalued.

There is more violence in Vikings than GOT and every episode has some big fight battle happening, whether it is brother upon brother, clan upon clan or Vikings vrs the English. The Vikings enjoy there revenge and with the aid of the gods they usally always get it. They are very superstitious and prey to Odin or Thor and the rest of the Norse Gods for everything. Where as the death scenes are very tastefully done, as is the human sacrifices it does not leave much to the imagination. Even though you did not get to see directly the "Eagle" being performed you could tell by the woman fainting, turning their heads or tears running down there faces or just the share look on Ragner face that it was a nasty, nasty thing to be inflicting on someone, let alone knowing that if the poor guy screamed out he would be refused entry into Vallalar.

There were a lot of twists in this season. Also not knowing where loyalties stood on occasions so it was a leap of faith that you stuck with the story. Favourites last season wavered in my eyes and I was gobsmacked on a couple of occasions. I worked it out come last episode but it was still a pleasure to watch it all fall into place. My respect has grown for females after watching what they have to live thru and both my husband and myself are huge fans of Lagertha, probably the strongest woman on Television at the moment. Well worth watching the series.

Score: 9.6
Product reviews for listing 4961: Doctor Who: The Day of the Doctor -  Type of Show: Science Fiction

Doctor Who: The Day of the Doctor - 50th Anniversary Special on DVD.

The action packed adventure reveals that the Doctor has a dangerous past. And he's coming back!

In 2013, something terrible is awakening in London's National Gallery; in 1562, a murderous plot is afoot in Elizabethan England; and somewhere in space an ancient battle reaches its devastating conclusion. This special also features the return of the ... more...