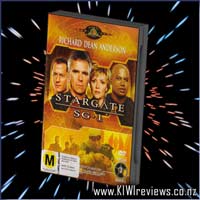 Disclosure StatementFULL DISCLOSURE: A number of units of this product have, at some time, been supplied to KIWIreviews by the company for the purposes of unbiased, independent reviews. No fee was accepted by KIWIreviews or the reviewers themselves - these are genuine, unpaid consumer reviews.
Available:
at good DVD retailers now

Episode 5: Nightwalkers
When a scientist working on stem cell research disappears, Carter, Teal'c and Quinn investigate and discover that the scientist's town is infested with Goa'uld who can only control the townspeople by night. Will the SG1 team be taken over next?

Episode 6: Abyss
A Goa'uld lord holds O'Neill captive and tortures him for information about the Tok'ra. As O'Neill suffers, Daniel Jackson appears and offers support. Meanwhile, SG-1 races to rescue O'Neill before it's too late.

Episode 7: Shadow Play
Quinn is conflicted when an old professor from his home planet asks SG1 to help stage a coup against the Kelownan government in order to stop a civil war. Should SG1 allow the planet to destroy itself... or are they placing themselves in needless danger?

Episode 8: The Other Guys
Two bumbling scientists working on an off-world research project witness SG1 captured in a Goa'uld raind and, defying the orders, attempt to rescue them. Little do they know that SG1 staged the capture in order to infiltrate the Goa'uld and make contact with a Tok'ra informant.

I have long been a fan (translation: addict) of Stargate SG1, and would have to admit that i have all of the dvds of the series now. due to a mixup at the local retailer, this particular dvd was not available and in fact was unable to be ordered any time soon due to a mixup at their distribution centre. they had sold out of all available copies and next shipment would be about a month away when they shuffled the stock at other stores who got overstocked. so when i was told that if i asked very nicely i could get this through the website, i was over the moon.
The plots are always self-consistent, sticking very closly to the overall plot of the series, meaning that even though each episode is self-contained, it is also part of a bigger story, which in turn is part of a larger story too.
My favourite character would have to be Col. Jack O'Neill, played by the surprisingly brilliant choice of Richard Dean Anderson, of MacGyver fame (also a favourite series of mine, and the main reason I gave the SG1 series a look in the first place.)
Though there is little in the way of 'soundtrack' the sound quality on the dvd is stunningly clear, and (much to the annoyance of my ward-mates as I sit here in my hospital bed recovering from Bronchitis) sounds great even on my laptop speakers.
But i must admit to the stunning special effects. being a veteran of the Star Wars era of special effects, and having a clear memory of the TRON movie's effects, i have to admit that i have real trouble believing the cast are NOT really firing energy weapons etc. seamless effects really make this easy to suspend disbelief and get right into the show.
If you like sci-fi, you'll love Stargate, the movie, the series, the lot.

Score: 9.8
Product reviews for listing 3877: Murder on the Train
Performed by Angell Productions