« The Hitchhiker's Guide to the Galaxy review 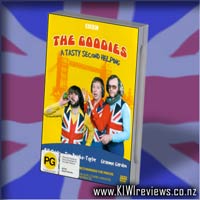 Disclosure StatementFULL DISCLOSURE: A number of units of this product have, at some time, been supplied to KIWIreviews by the company for the purposes of unbiased, independent reviews. No fee was accepted by KIWIreviews or the reviewers themselves - these are genuine, unpaid consumer reviews.
Available:
April 2005

Tim Brooke Taylor, Graeme Garden and Bill Oddie, were an instant success with their mixture of outrageous humour and visual effects.

The characters were instantly recognisable stereotypes: Tim, the champion of everything British, Bill the bearded hippie in his rebel combat jacket and Graeme, the mad scientist dreaming up new and impossible schemes. Together they were 'The Goodies', complete with their own unique style of transport - a three-seater tandem.

Adored by thousands of fans around the world, one of their greatest was Prince Charles, who even offered to play himself in the episode "The Existence of Rolf Harris". NOTE: This episode is not on this DVD.

DVD Special Features:
•  Christmas night with the stars
•  Crackerjack
•  The Goodies sing "A Man's Best Friend is His Duck"
•  Collection of Goodies
•  'The Gymnasium'

Many years ago I caught an episode of The Goodies on TV, and was hooked right away. It was British humouor taken to extremes, in the same vein as Monty Python, but along slightly different lines. Whereas Monty was just aiming for surrealistic 'totally out there' laughs, The Goodies seemed to be trying to poke a bit of borax at the British Establishment in the process.
Of the 8 episodes on this 2-disc set, 2 really grabbed me as having something special. Movies was a strange and surrealistic approach to moviemaking, with the team splitting up to tackle things in their own unique way, from Tim's semi-romantic dramas, Bills attempts at black-&-white silent movies (where he paints all the sets in shades of grey and uses colour film!)... but the best bit of all is the totally whacky ending which you just have to see to believe. I can't explain it.
The second episode is probably my 2nd favourite episode from the the entire Goodies collection, Bunfight at the OK Tearooms. When the guys try goldmining, but instead stumble on a vein of pure Cornish Creme, things get messy thanks to Graeme's sudden burst of greed. So Tim and Bill team up to take him down. Their luck changes when they accidentally discover huge underground deposits of Strawberry Jam and free-range scones, leading to a power struggle and the inevitable sauce-out at the OK Tearooms. A brilliant parody of the Ol' Wild West days as only the British could ham it up.
This is a great collection, well worth the money to any connoisseur of British wit. If you have some Monty, maybe a dash of Kenny Everett and/or Benny Hill, you should already have The Goodies. If not, what are you waiting for?

The multi-award-winning hit show returns for an electrifying third series that introduces a dangerous new threat to the 'clone club' sisterhood.

Just as Sarah and her clone sisters were beginning to piece together the complex conspiracy behind the shadowy Dyad Institute, the discovery of Project Castor - a top-secret military project producing highly trained male clones - throws their lives back into turmoil. Watched over by ... more...