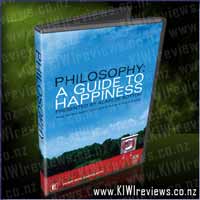 In this engaging and informative six-part series, popular English philosopher Alain de Botton looks at six great European thinkers and how their messages can be applied to the problems of everyday life today.

Episodes:
•  Socrates on Self-Confidence
•  Epicurus on Happiness
•  Seneca on Anger
•  Montaigne on Self-Esteem
•  Schopenhauer on Love
•  Nietzsche on Hardship

As a general rule I am one of the sheep, one who cruises along life's highway with the rest of the flock and occasionally side-stepping into a new lane when opportunity and impulse coincide. Despite thinking on other matters in great detail at times, thinking about the why's and wherefore's of my life and decisions has never been one of my strong points. This will now change, thanks to some of the excerpts from this series.

Six episodes, each focusing on one of Europe's greatest introspective minds, make up the series. Each revolves around a key idea or concept that forms the hub of each thinker's own philosophical theories. Socrates had, at the root of his ethos, the concept of "Be conscious of your life" - not only should you think on the decisions and their outcomes, but also on your motivations of your actions. Are you helping that person because it is the right thing to do, or are you seeking recognition and adulation? To Socrates, happiness arises from seeking and finding the truth about yourself.

A similar thought was the grounds of Epicurus' ethos, 'Be honest about and to yourself', accept and be comfortable with your strengths without boasting, and also accept your limitations without remorse. Epicurus believed that happiness was found once you had three key elements in your life: The constant company of good friends with whom you may discuss all matters in life, good and bad... Secondly, your independence from state and fiscal obligation, so that your happiness isn't reliant on hand-outs... and thirdly a studied life, in that you should follow Socrates' methods in self-analysis so that you can identify your true nature and thus begin to accept it, or alter it in line with your goals.

Seneca had the theory that happiness came from accepting the reality of the world as it was, instead of expecting it to be something different. He rationalised that anger, the prime force that worked against 'being happy' was the reaction to our realisation the the world wasn't going according to our plans. He felt that this wasn't an irrational reaction, but was inappropriate. His theory was that if we became a little more pessimistic, lowered our expectations, we wouldn't be so surprised and shocked when things went wrong, and thus we could rationalise our reaction and be able to offer a better one, thus becoming happier about the outcome. He suggested that most of us under-estimate how badly things can go wrong, and over-estimate our ability to affect matters relating to us. Can we stop the bus we are on from crashing, thus making us late to an appointment? Not really, so why get angry about it! Accept it as a matter beyond our control, figure out the best way to proceed, and get moving.

Montaigne was a real gem for me. He understood human nature in a way only someone with Aspergers could appreciate to it's fullest. 'Accept yourself in all ways, and be comfortable in yourself' - he believed that social taboos about the facts of our basic humanity was the biggest stumbling blocks to true happiness. As he put it we are all human to the same degree. Whether we are royalty-born, or the lowest peasant stock, we all sit down to shit. As someone with a mild form of Aspergers, I have often been accused of being too blunt and willing to raise topics socially frowned upon, in a frank and open manner. I have always felt that if it a fact of life we all share, it's something we should all be willing to discuss if it hold relevance and interest at the time. Hiding behind euphemisms and sideways references has always struck me as the epitome of stupidity... much to the embarrassment of my social cohorts at times. Montaigne's rationale strikes me as self-evidently and obviously correct. Ever since I understood why I was the way I was, and learned to accept it as an unalterable fact of my very nature, I have been a lot happier in my own skin, as it were.

Also in the series we are introduced to Schopenhauer and his thoughts on Love. According to him, 'Love' is a side-effect of the subconscious biological urge to procreate, with someone we have identified, on some level, to be a suitable biological counterpart to our own genetic makeup. If we feel we are too tall, we tend to seek shorter partners, in the hope that our offspring will be more 'average' - not always factual, as governed by the semi-randomised nature of genetic drift and mutation, but it usually seems to work out. A bit of a cynic when it comes to matters emotional, Schopenhauer was all for us seeking happiness, but cautioned that the feelings of 'love' tend to be transitory at best and thus we shouldn't build our happiness solely upon it. An emotion-related version of "...not putting all our happiness-eggs in one basket..." in effect.

Finally, the oft-maligned Nietzsche. His ethos of "...wishing pain and suffering, hardship and tribulations upon your friends..." was more often than not misunderstood, even today! From him comes the adage "That which doesn't kill me, makes me stronger" - and thus happier in some way. The joy of overcoming the hurdles, breaking the barriers and surpassing ones limitations is well known. Just ask any professional athlete who's won a big race, or any salesperson who's just got the monthly bonus for excellence, or the student who has just scored an 'A' on a test they felt sure they would at best get a 'B-' on... but his way of expressing it often fell more in line with blunt than diplomatic. Nietzsche felt that "... difficulty is normal, and we shouldn't panic or give up because of it." We learn from our mistakes. Failure and hardship put into perspective those moments of true glory and success. Without the hardship in life, how could be possibly recognise and appreciate all the good?

Overall, this is a brilliant series, brought to us by Alain de Botton. I am not sure about Alain himself though... he may indeed be a great thinker in his own right, but his presentation was a little flat and dull. I was fine with it, as I was more caught up in the content itself, but one comment from a friend who wandered in while I was watching had be realising that he wasn't exactly '...bringing things to life...' and '...talks more like a smug lecturer than a narrator...' - which, of course, would have been a more appealing manner to have taken. None the less, for sheer 'revelation' value, this one is hard to beat. Everyone can find something in here to give them pause, if they will but listen...

A for Andromeda and its sequel The Andromeda Breakthrough were the sci-fi sensations of the 1960s. Their influence can still be seen today in films as dissimilar as Contact and Species.

A For Andromeda - The year is 1970. A team of scientists decode a mysterious transmission from the Andromeda galaxy and discover that it provides instructions to build a computer more powerful than ever conceived of on earth. When constructed, the ... more...