« Doctor Who: The Web of Fear review 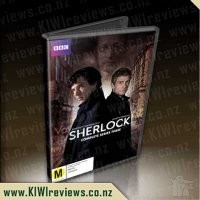 The question on everyone's lips will finally be answered when Sherlock returns - how did he do it?

Two years after the devastating events of The Reichenbach Fall, Dr. John Watson has got on with his life. New horizons and romance beckon in the shape of the beautiful and smart Mary Morstan. But Sherlock Holmes is about to rise from the grave. And even though it's what his best friend wanted more than anything, for John Watson it might well be a case of 'be careful what you wish for!'

Once again, the game is on for Sherlock and John. In three brand new adventures, Sherlock and John face baffling mystery beneath the streets of London. Sherlock is back, but will things ever be the same again?

True story. A few years back, not long after a Sherlock film came out, I was flying back from India on a Qantas jet reading the works of Conan Doyle. One of the airhostesses noticed I was reading one of the Sherlock Holmes novels and commented, "I didn't know the book was out already...." In an age where most people watch the film first and then read the book, what does one say to that? I pointed out that the "Sherlock has been around for 125 years darling" (first published in 1887) and left it at that. I guess that is why she was an airhostess!

Sherlock Holmes is one of my favourite literary detectives (along with Inspector Morse) and bringing a character to screen can always be fraught with some difficulty - your mind's eye presents you with one picture, the director presents you something at odds to your perception. The Robert Downey Jnr incarnation definitely was not one I enjoyed - there was something missing from the essential gentleman character of the book and took us away from the real character of Holmes. Elementary, a US version with an American Dr Holmes - sorry, just can't watch it. I can't warm to the characters or the location. The actor looks and sounds a bit thick, Watson - well, the less said the better. There is no chemistry between the actors and the whole thing just does not work for me.

But the Sherlock as played by Benedict Cumberbatch is thoroughly enjoyable. He has captured the essence of Holmes, captures the nuances as written by Conan-Doyle and brought those out. Despite being a modern day setting (and a 3 patch problem instead of the 3 pipe problem - a nod to the modern day anti-smoking & Nicotine patches); Holmes is a likably unlikable character. Although set in modern times (it does lose the smoky, misty atmosphere of Victorian London), Cumberbatch brings a different dimension to the character of Sherlock that is so different to previous incarnations, and yet brings out the Asperger/Sociopathic side to Holmes that is missed by so many other film versions.

Watson is believable as a slightly put-upon sidekick (It was Holmes and Watson that started the brilliant detective with lowly sidekick genre that has carried on to this day). A ex-army doctor, served in Afghanistan (India in the books) who brings out the more human side to Holmes and the perfect juxtaposition between the cool, calculating analytical machine that is Holmes with the warm, friendly, more human Dr Watson.

Series 3, follows on from the death of Holmes (in series 2) and brings him back to life, marvellously weaving in the discussion that I followed in the UK papers at the time (which went on for a few weeks at the time). It was good to see this nod to the press and the public and numerous theories are played out as to how Holmes survived the fall - and that is where I will leave it. No-one likes a spoiler.

At only three episodes, it is short as a miniseries, but it is a thrilling ride nonetheless which will leave the viewers waiting for more. There is a heck of a twist in the last episode regarding Mary and this cliff-hanger will both irritate you (because you want to know more) but will have you on tenterhooks for the next year or so until all is revealed in the next series - IF there is a next series.

Learning is more fun when you do it with friends! This DVD contains a selection of episodes from HIT Entertainment:
•  Thomas: Thomas & the Colours
•  Barney: The New Kid
•  Pingu: Pingu and the Rubberband Plane
•  Bob the Builder: Dizzy & the Walking ... more...