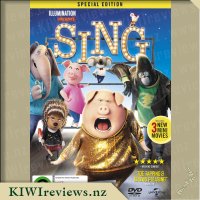 Buster Moon is a dapper Koala who presides over a once-grand theatre that has fallen on hard times. He is an eternal optimist... okay, maybe a bit of a scoundrel, who loves his theatre above all and will do anything to preserve it. Now facing the crumbling of his life's ambition, he has one final chance to restore his fading jewel to its former glory by producing the world's greatest singing competition.

Five lead contestants emerge: a mouse who croons as smoothly as he cons, a timid teenage elephant with an enormous case of stage fright, an overtaxed mother run ragged tending a litter of 25 piglets, a young gangster gorilla looking to break free of his family's felonies, and a punk-rock porcupine struggling to step out of the shadow of her arrogant boyfriend. Each animal arrives under Buster's marquee believing that this is their shot to change the course of their life.

We have been spoilt for choice when it comes to animated movies over the last 15 years or so, but they still continue to bring them out. Obviously they must be successful for them otherwise they wouldn't. I personally love them as they are something you can watch with or without children and there is enough humour to appeal to both age groups.

I received a digital copy of the movie Sing to review. My husband and I often purchase DVD's and Blu Rays ourselves, but we have never had a digital copy to redeem. The process to be able to redeem it was quite easy. As directed on the slip of paper my husband headed to the ultra violet universal website, entered the redemption code and then was prompted to make an account. In no more than five minutes he had it all loaded and ready to go. As we have Chromecast we were able to stream this through the television and the picture and sound were perfect.

I have always been a fan of movies relating to music. Knowing that this movie was called Sing, I could only assume it would feature singing in there for most of it! And I certainly wasn't wrong. The movie begins by introducing us to all of the main characters. We get to see a wee glimpse into their lifestyles, and of course each one is quite different to the other. As the movie introduced each character I decided to do a quick google search to see whether I knew any of the names behind the voices. There were a few names that I recognised - Matthew McConaughey, Reese Witherspoon and Scarlett Johansson just to name a few. I soon learnt that Buster Moon is the main character who brings all of the other characters together by holding a singing competition in his struggling theatre.

The rest of the movie runs similar to any of the American Idol and The Voice type series, except that it is focused on a bunch of animated characters. We get to see the journey that each of these characters take and the way in which the singing competition affects each of them. Meena the shy elephant would have to be my favourite character, having an absolutely amazing voice that noone is aware of until the end of the movie where she gets heard singing. Moon talks her into singing in his final showcase and she comes into her own, taking over the stage and getting everyone into it!

At the end of the movie you are left feeling positive and calm. The movie has an overall theme of going for your dream, even if you or others think you aren't good enough. It shows that no matter your background, you are able to achieve any dream you have. Each of the characters were met with opposition from various people in their lives, but they all continued to push through and in the end everyone was impressed, proud and happy about what they had achieved. A great movie to show to the young children to inspire them for their future.

While I enjoyed this movie, it is one that I feel I have watched now and have no need to watch again. However, it is one that I could see being enjoyed by many families and played a number of times. The music is very catchy and I think the soundtrack would be a great one to have to play in the car.

When I saw the trailers for this, my first thought was American Idol with animals, and that pretty much right but there's also so much more going on here. Moon loves the theatre and in a moment of desperation decides to hold a singing contest but an accident causes much more interest than expected and a few more bluffs from Moon.

The movie doesn't centre only on Moon, we get a brief intro into each of the main animals and what they're like, and along the way we get various insights to their personalities. Mina, who's so shy she can't muster up a note but has a stunning voice. Ash, who has the talent but has a boyfriend who wants to hold tight to centre stage. Rosita, the tired worn out mum to 25 (I can't relate to the number of kids but I can the exhaustion) who pairs up with Gunther (though we don't get any back story to him). Johnny who doesn't wanted to follow in his gangster fathers footsteps. And then there's Mike who thinks he's the ultimate gift to the world and doesn't care for anyone but himself.

What I really like about the characters and their development is that there are no sudden, big changes to the base of who they are, they are built upon but not altered in such a way that the jerk is still a jerk, the tired mum is still tired and overworked etc. but they've grown and been able to find themselves a bit more. Then there's the sheer amount of music in this movie, the rights alone to use the snippets cost the production team a few million dollars. There is a good range of songs from recent hits to older songs, so something for all generations, though the majority of these songs will be known at least in passing.

I am NOT a fan of the menu 'page' of this dvd, I would far have preferred it to have the labels attached so I didn't have to guess at all. There is a good amount of special features on this dvd including a guide to some dance moods, so if you have kids in the house who love to dance, this was a good clip to watch. If you love Ash as much as my kids do, then you'll enjoy the lyrics video for the song she performs as her final act for the movie, and there's a music video for "Faith" which was a new song for this film by Stevie Wonder and Ariana Grande. Most enjoyed was the three mini movies featuring Gunther (with Rositas piglets), Miss Crawly and Eddie, all of which are lots of fun and were played on repeat by my kids.

While it isn't a new plot, the characters are a lot of fun and there is a great range of personalities and music. Lots of fun and perfect for a family movie together.

Joan Castleman is a highly intelligent and still-striking beauty -- the perfect devoted wife. She has spent 40 years sacrificing her own talent, dreams and ambitions to fan the flames of her charismatic husband and his skyrocketing literary career, ignoring his infidelities and excuses because of his art with grace and humour. Their fateful pact has built a marriage upon uneven compromises, and Joan has reached her breaking point.