« Revenge of the Nerds review

ProdID: 5166 - Revenge of the Nerds 2: Nerds in Paradise
Directed by Joe Roth 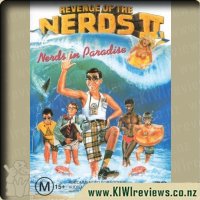 Revenge of the Nerds 2: Nerds in Paradise product reviews

Everyone's favourite nerds are back! This time Lewis, Wormser, Poindexter, Lamar and Booger are off to the United Fraternity Conference in Ft. Lauderdale. Unfortunately, the hotel manager and Alpha Betas join forces, leaving the Tri-Lambs with no place to stay but the Ricky Ricardo Wing of the dilapidated Hotel Coral Essex. But even though the boys are misled, mistreated and misused, they once again strike back, proving the importance of self-respect in a wild and wacky lesson you'll never forget.

This time our nerd heroes must once again fight back against their most hated enemy, Lewis grows up quite a bit and stands up for his fraternity brothers. Armstrong is his funny self playing the nose picker Booger is hilarious, he gets some great lines in the movie. With a year having passed since the last movie you would have expected to see some growth in the characters but there isn't any, they are still the exact same people they were a year ago. This movie is mostly a recycling of the first movie.

Some of jokes and one liners are funny but most of them fall a little flat as they are more or less repeats of the previous movies jokes, just altered slightly to appear new. The characters fall quite flat this time around and their nemesis is even more one dimensional than in the previous movies and you really don't have any motivation for anyone, good or bad, to win, which isn't really a good thing, you're meant to root for someone!

This film may not be a laugh fest but provides a little humour and some memorable quotes.

At the end of the universe lies the beginning of vengeance. It is the 23rd century. The Federation Starship U.S.S. Enterprise is on routine training manoeuvres, and Admiral James T. Kirk seems resigned to the fact that this inspection may well be the last space mission of his career.

But Khan is back. Aided by his exiled band of genetic supermen. Khan - brilliant renegade of 20th century Earth - has raided Space Station Regula One, ... more...