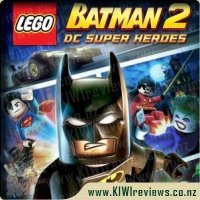 Batman and Robin return in LEGO Batman 2: DC Super Heroes, the highly-anticipated sequel to the best-selling LEGO videogame of all time, which to date has sold more than 11 million units worldwide. This time the Dynamic Duo join forces with other famous DC super heroes including Superman, Wonder Woman and Green Lantern to stop the notorious villains Lex Luthor and The Joker from destroying Gotham City. Batman fans of all ages will enjoy a new and original story filled with classic LEGO videogame action and humor as players fight to put the bad guys back behind bars.

Experience an original LEGO adventure that has Batman and Robin teaming up with Superman to defend Gotham City from The Joker and Lex Luthor.
Discover a new storyline that introduces a massive Gotham City hub full of fun exploration, collection and vehicles.
Traverse Gotham City's open realm by walking, flying or unlocking and controlling a variety of cool vehicles including the Batmobile, Batwing and Batboat (Xbox 360, PS3, Wii and PC)
Experience for the first time in a LEGO videogame, talking LEGO minifigures.
Master new suits and gadgets, such as Batman's Power Suit and Robin's Hazard Suit equipped with a Pressure Cannon that can absorb and dispense hazardous liquids.
Collect 50 DC Comics characters, including The Flash, Wonder Woman, Green Lantern and many others.
Flex your new super abilities and soar through the air with free-roaming flight, freeze and push objects with Super-Breath, and heat up and cut holes through objects with Heat Vision.
Create unique super heroes with customizable characters.
Play with friends and family using easy drop-in/drop-out co-op play that features dynamic split screen (Xbox 360, PS3, Wii and PC).

Lego Batman 2, a game that there was no doubt I would play as I'm a huge fan of the xbox lego games but it was also the first one I was unsure about as it was the first in the lego series where the characters actually talk. But putting that aside it was still a lego game and still something I wanted to play.

You start off as Batman and Robin, eventually opening up characters such as Superman, Flash, Wonder Woman, The Green Lantern and as you continue you get to play the bad guys like Lex Luthor, The Riddler, Mothman etc.

The storyline was pretty average and whilst it wasn't too bad I found that that part of the game went far too fast and could have done with more. However, what it lacks in storyline it makes up for in free roam game play. You travel around Gotham City and have certain things to do, you have Citizens in Peril, vehicles to unlock and Gold Bricks (for which you have a range of things required to do to gain them).

I really enjoyed this game. Talking characters did take some getting used to, but after a couple of hours gameplay you're well used to it.

Say Anything - and find out what your friends really think!

Draw a card and ask a question from it. Everyone else writes an answer and turns it face-up. Secretly choose your favourite answer. Then everyone tries to guess which one you ... more...