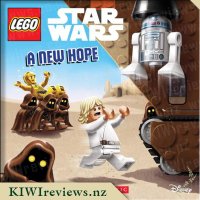 The epic film retold in funny LEGO ® colour cartoon scenes. Action, laughs, wookiees and big explosions! The galaxy is in trouble. Evil Darth Vader has created a terrible weapon, the Death Star. Luckily, a young hero named Luke Skywalker has a plan to destroy it. Will his plan work? Do Ewoks dance in the woods? And will you be able to stop laughing? Find out in this cheeky new take on a Star Wars classic!

The Boys' Book of Adventure
Rating: 9.3

Out of all of my kids, my eldest was the first to fall in love with Lego, and then he fell and fell hard for Star Wars, with his repeated use of the two (and the Lego star wars game) the other two have joined him with his love of the two, so this book was perfect for them. Though my eldest is becoming a competent reader, I was still asked to read this to the kids first and so I obliged. I've read hundreds of kids books in the past 8 years and some are great and some, not so much and this rates down the lower end.

The book has the type of jokes I've come to expect from the Lego games, I just felt like they didn't translate well into the written word and they fell a little flat with the kids too. The wording also felt a little off and didn't inspire me to read it again, even Mr 8 is happy enough just to look through at the pictures and not so much the story, he even said that the book is a bit silly and just fun to look at. $9 isn't too bad price wise but for a book no one loved... in saying that, it will get looked at now and then, just not as much as any of their others books.

My kids (6 and 7.5 year old daughters) both love Star Wars and Lego so they were excited when I showed them the new book I had been given to review. They haven't seen the latest movie and neither have I so I don't know if it would have been better if we went into reading this with the prior knowledge of the plot. It is written as a comic book or junior graphic novel which appeals to the children but is not my favourite genre.

I read the book once to them and they haven't asked for it again. They listened well enough to it but weren't engaged as I had hoped. I found it was often difficult to get a flow and I wasn't sure if I was reading the speech bubbles or the frames in the correct order. This obviously didn't help their level of engagement.

Since the children, including the three 4.5 year olds I work with, have seen this book they have all sat down and made up their own story from the pictures. The children love the illustrations. I am tempted to allow them to cut up the book and write their own words for it or use it to decorate the playroom walls. At $9 it is a very affordable book (or wall art) which hopefully is more popular with other children.

When the newly promoted captain of the NYPSD and his wife return a day early from their vacation, they were looking forward to spending time with their bright and vivacious sixteen-year-old daughter who had stayed behind.

Not even their worst nightmares could have prepared them for the crime scene that awaited them instead. Brutally murdered in her bedroom, Deena's body showed signs of trauma that horrified even the toughest of ... more...