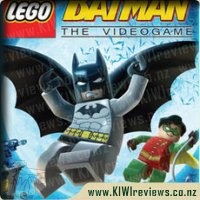 LEGO Batman: The Videogame is the latest game from the award-winning team behind the LEGO Star Wars series of games. With trademark LEGO fun and charm, the game takes you into the world of the ultimate crime-fighting hero.

LEGO Batman: The Videogame brings the one-and-only Caped Crusader to life in a completely original storyline. Players will take control of the Dynamic Duo, Batman (Bruce Wayne) and Robin, as well as bonus hero Nightwing to fight Gotham City's most notorious criminals including The Joker, The Penguin, Catwoman, Scarecrow, Killer Croc, The Riddler, Mr. Freeze, Harley Quinn, Two Face, Bane, Clayface, Poison Ivy and many more. The criminals have broken out of Arkham Asylum and are set to wreak havoc on the city.

Players will also be able to explore their wicked side and fight their way through the game as the villains, experiencing the game from a completely different point of view with all-new criminal objectives. With a collection of high-tech suits, gadgets and cutting-edge vehicles on hand, players will be able to step into the unique LEGO Batman universe to bring super villains to justice - or, as the villains, to run amok in Gotham City!

Now, I was never a Batman kid. My brother wasn't really a fan, my dad only watched it if nothing better was on and my mum was in love with Superman at the time. I, of course, knew the basics of Batman and who his enemies were, but never knew anything beyond the basics. Which for this game... Is perfectly fine.

The long run of the storyline is that the Joker is planning something, yet again, that will give him control of some sort over Gotham City. Now, of course, as the hero you cannot allow this to happen.

The game itself is split into three parts, and like the other games, each part have six levels. Each part has it's own little plot line and a main baddie who is trying to get a piece of the puzzle, so to speak, for The Joker. You can alternate between playing Batman and Robin, and as you go along you will be able to wear new suits, each of which gives your character special abilities.

Get to the end of the basic plotline and you get to go into free play. As with others in the Lego game range, there are a set of tasks for each level, all with add up to get you 100% game completion. But even better.. You then get to switch over to the bad guys and find three more levels, each with six levels inside them, and you get to be trying to get all the things needed to take over Gotham.

The only downer to this game is that you don't get to be a bad guy in a fight with Batman, yes, I know, you would only loose anyway, but it would still be fun... :)

Unravel the Mystery of Malgrave Island!

The seek-and-solve fun of the Mystery Case Files series makes its first appearance on the Wii system with Mystery Case Files: The Malgrave Incident. Players must unravel the mystery behind the enigmatic Malgrave Island and search for clues, solve puzzles and find cleverly concealed items in varied multilayered hidden-object scenes.