Cloudy with a Chance of Meatballs 2 review 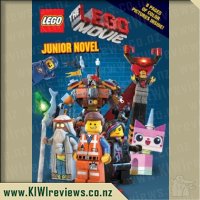 The first ever Lego movie hits the big screen April 17, 2014. This animated, family-friendly movie has an all-star voice cast. Written and directed by Phil Lord and Christopher Miller (Cloudy with a Chance of Meatballs), The Lego Movie is a hilarious adventure that takes place in a world made entirely from Lego bricks. Emmet, an ordinary Lego Minifigure, is mistakenly thought to be an extraordinary Master Builder and he is recruited to join a quest to stop an evil tyrant (Lord Business) from gluing the universe together, thus destroying creativity. Now
Emmet and his friend Lucy need to go on a quest through various Lego lands to save the world.

My 6 year old is really into his chapter books and what little boy (or girl) doesn't like lego? This book is sure to be a hit with both genders and all ages - I know that I found it to be highly amusing.

The book is about Emmet Brickowski, who is your average, everyday Minifigure. One day he happens to stumble across the Piece of Resistance and is then mistaken for being a Master Builder. The following adventure is fast paced, action packed and hilarious - it had my son in fits of giggles.

I love the frequent use of humour and Emmet is certainly a colourful and entertaining character. I liked the inclusion of colour pictures in the middle of the book and they definitely helped my son to form clearer images of what the characters look like as I read the book. The chapters are a bit too long for the age group that this book is targeted at and without illustrations, it was hard work keeping my son interested and we weren't able to read more than one chapter at a time.

The only thing that I didn't particularly like about this book is some of the language, e.g. "Oh, come on! You can't be this stupid." It's just my personal preference but I'd rather not encourage my son to speak like that to anyone. (There were other instances that I wasn't happy with but this is the one that springs to mind right now).

It's certainly a fun book and after reading it, we may just have to check out the movie as well.

My six yeal old, four year old and three year old have just recently discovered the joy that is Lego, so I know this movie will be on our TV one day, so for now I thought this book would be a fun read.

Emmet Brickowski is an average lego minifigure, in face so ordinary that almost no one actually remembers him. One day he stumbles upon the Piece of Resistance (I really love the names in this story!) and ends up on the ride of his life when he is thus mistaken as a Master Builder. What follows is a whole lot of action and such characters as Bad Cop, who is literally a bad cop (in the evil sense not the stupid sense), Batman, Metal Beard and so on.

Some bit in this I didn't like the writing style, but they were minor so it didn't have a adverse effect upon the overall story. I love some of the lines "You should always trust any wizard guys who have important looking beards. It's just the smart thing to do" and "what a bunch of hippy-dippy baloney" to name just a couple of lines I really enjoyed.

I would have to say that I enjoyed this as much as my three children did and so I shall indeed be reading this to them, over a couple of nights, again and I now really want to see the movie too!

Score: 10.0
Product reviews for listing 1569: The Tide Lords #2 - The Gods Of Amyrantha -  Written by Jennifer Fallon

'The Tide Lords are returning and that means every man, woman and child is in danger -'

Arkady is exiled to the repressive Torlenian capital, where she makes some unexpected friends and some powerful enemies, all of whom seem bent on using her to wreak vengeance on each other.

Things are not going so smoothly for Declan Hawkes, the King's Spymaster, either, and not just because the Empress of the ... more...